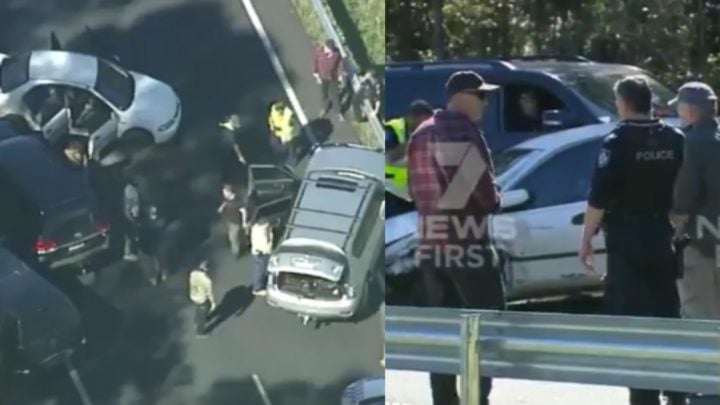 Queensland Police confirmed that a 23-year-old man has been taken into custody. Source: Twitter/7 News Brisbane.

Police opened fire on a 25-year-old man on Wednesday morning, after the armed offender carried out a series of violent car thefts on the Sunshine Coast and led police on a 200km pursuit.

Queensland Police confirmed in a statement that the man had been transported to the Sunshine Coast University Hopsital, where he remains in a serious condition following the incident, which was brought to an end when a specialist officer fired at the offender.

A spokesperson for the force also confirmed that the criminal was struck by a passing vehicle on the Bruce Highway.

Police will allege that the 25-year-old, who was wielding a knife, began his crime spree when he forced a man out of his Holden Colorado ute in Hervey Bay at around 6.25am this morning. He is then believed to have driven to Tinana, where he discarded the ute around one hour later.

He is then alleged to have broken into a home of Three Mile Road West, shortly before 8am, where he demanded that the female resident hand over her vehicle. However, the woman in her 30s – who, according to local news outlet Chinchilla News, was pregnant – refused to cooperate with police confirming that she was then stabbed in the hand during a struggle with the carjacker.

“The man produced a firearm and discharged a number of shots before fleeing the scene,” police added.

Traffic was brought to a halt in both directions, as police opened fire to end a 200 kilometre pursuit that stretched from Hervey Bay to the Sunshine Coast this morning. https://t.co/7TloROsNFO #7NEWS pic.twitter.com/9cMl6kYI9W

The man, who remains ion police custody, is then alleged to have gained access to another home on River Road before making off with the owner’s white sedan, driving at high speed along the Bruce Highway, before the vehicle was spotted crashing through roadworks, south of Tiaro.

A force spokesperson added: “Police then continued to track the vehicle as it proceeded south through Gympie and along the Bruce Highway through the Sunshine Coast.”

Police finally intercepted the stolen vehicle at around 10am, which is when the offender was shot.

The Criminal Investigations Branch and Forensic Crash Unit is continuing its investigations into the incidents, while the Ethical Standards Command has launched a critical incident investigation into the police response.