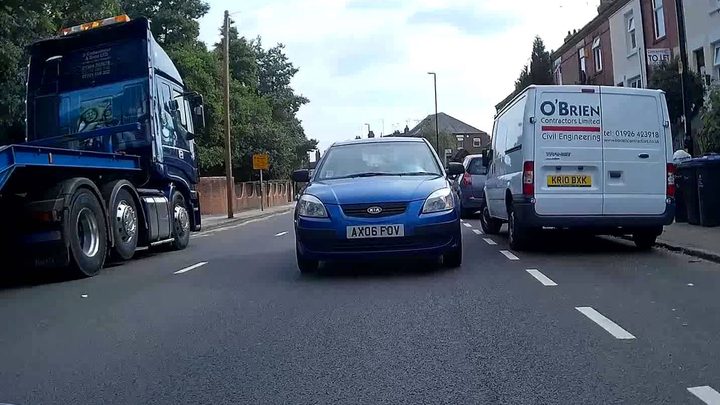 An Aussie couple is on a holiday in the US enjoying their retirement years. The husband decides to explore the area in the hire car while his wife is visiting a friend. “Make sure you have your mobile on you,” she says. He pats the phone shaped bulge in his pocket and heads out. He finds it difficult to navigate the streets and deal with the road rules of the county, the Bluetooth in the car goes off, and it’s his wife. “Be careful out there, Rob, we just saw on the news that there is a maniac driving the wrong way down the street.”  “Just one?” Rob said, “There’s hundreds of them.”

While that might be an old joke but there is still a lot of truth behind it. Driving on the other side of the road can be daunting if you have never done it before. There are a lot of simple tricks, for example, the side that the steering wheel is on is the side that the centre line goes on. The stories where travellers got it wrong can be hilarious, though they probably weren’t at the time.

My father-in-law was telling me about driving an RV around Europe thinking that it would be a simple and cost efficient trip for the family when they were young. I’m sure by the end of the journey the amount of fines he accumulated for traffic violations would have easily paid for a hotel. His most harrowing experience was when he took the RV the wrong way down a one-way street in Italy. It caused so much chaos that it made the local news.

A user on the Rick Steves’ Europe forum shared “My 11 year old son burst into tears within five minutes of us on the road begging me to return the car. We got lost trying to get out of Carlisle and went on the same roundabout seven times before finally figuring out which turn to take. And then there was that motorcyclist that I almost gave a heart attack to since I was on the wrong side of the road.”

Another user shared his experience saying that when he first visited Europe in 1963 he had no problem but 50 years later when he was there in a car he “overcompensated for the centre line, terrifying my wife every few blocks by nearly sideswiping cars and kerbs and those ancient stone walls they use for shoulders. Once I blew out the left front tire banging into a stone set into the pavement”. Certainly not something that they could laugh about at the time, but now I’m sure it gets a hearty laugh.

What are your experiences with driving on the other side of the road? Was it stressful or were you one of the lucky ones that had no problem?