‘I ran a half-marathon at 64, just months after breaking my leg in three places’ 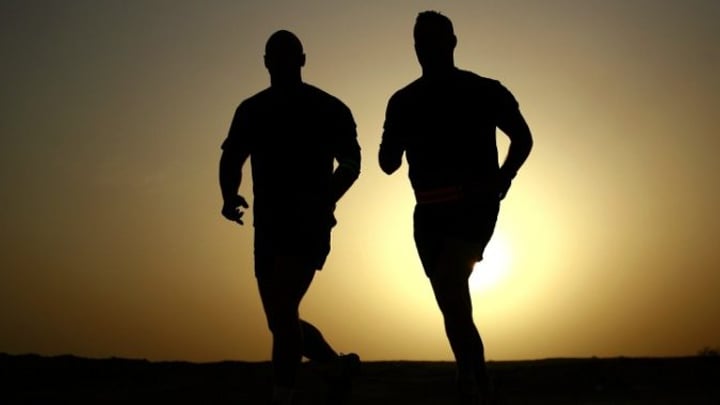 Tony returned to running after giving it up 40 years ago. Source: Pexels

On July 1 last year I managed to break my leg in three places – a stupid thing to do, but these things happen.

After surgery to pin my bones together I ended up in a wheel chair until late November, so my life and priorities changed. I got to know the physiotherapists very well!

My eldest daughter has been running marathons for a number of years and we had been to see her run in the Melbourne Marathon. My partner decided to do a half-marathon with our daughter, but had a horse stomp on her foot, breaking her toe, and took the toenail clean off her big toe. Consequently, she thought she would have to drop the idea of running a marathon.

But I thought I would step up and do the run anyway, after all, it was only 21 kilometres.  In the end, all three of us finished the Great Ocean Road half-marathon in May this year. What a hoot that was! Our times were not particularly quick, but the event was heart-warming, complete with yoga afterwards.

My last marathon had been in 1979 and most of the people running at the Great Ocean Road were my children’s age or younger. I had run in a few in the 1970s but we only had small numbers. Here we were with thousands of people all out giving it their best; all ages, all body types; all levels of ability as well, with a large number of women out running (or doing the Cliff Young shuffle).

At the end of the run, I met up with a ‘young’ fellow who I had come crossed paths with several times on the run and in the end, he had beaten me by five minutes. I went over to say you are amazing, he just smiled and said, “yes, I know”. He turned out to be 86 years old and this was his 14th half-marathon. (I plan to beat him next year – after all I will be only 65 then).

I guess this is the reason I run – because the people are just great, the experience is challenging and the pain is manageable. I sometimes train with my daughter and it’s brought us close together. My partner is always challenging me on track and off and I guess that is what I need.

It is not all bells and whistles, I am sitting here with an ice pack on my calf, thinking of what run I will do today, how to improve my pace, how to reduce injury.

I have a fantastic physio in Hastings named Pierre who keeps us all going.  We use technology to improve our running and just love it. My running weight in the 1970s was as low as 51 kilograms, now I run in the low-70kg range.

I do cross training work at Active One group in Frankston at least five times per week, and we have our own gym at home.

This year we have done the Great Ocean Road and the Gold Coast marathons, and will be doing Sydney in September and Melbourne in October.  Planning on Melbourne being my first full marathon as I want to do this before I turn 65! What I regret is that I gave it away in the late ‘70s, but I had a new challenge, then a family, a career and a different direction to travel.

We have bred and raced horses for 23 years, now we plan to race ourselves for as long as we can. Our long-term goals are to run the London, Boston, Rome and Paris marathons. We’re also looking to do the Camino Trail in France/Spain trail next year.

Running to us is like a drug, it challenges you, it moves you forward and it gives you an amazing feeling when you achieve something. But we are like an older car with a few kilometres on the clock, in that we need to look after the body and engine. The engine is still strong, and the body need a little work now and then.

I was finishing a 15-kilometre run the other day and a young person stuck their head out of a 4WD driving past, yelling “Run, Forrest, run”. What a great feeling!

When doing my first run back this year nearing the finish people were out there yelling to me to keep going. I was at first a little taken aback – who are these people, how do they know me? But then I realised my name was on my bib.  When you get this encouragement, you run harder, you find something to keep you going faster, and it’s the greatest feeling.

We have a heathy diet, drink a lot of water, and do not drink much anymore, but like a good merlot now and then. We have a great life, says me, with my leg up, icing my calf hoping to run again today. We just love it.

Have you run a marathon or enjoyed the mental and physical stimulation of running? How do you keep fit?