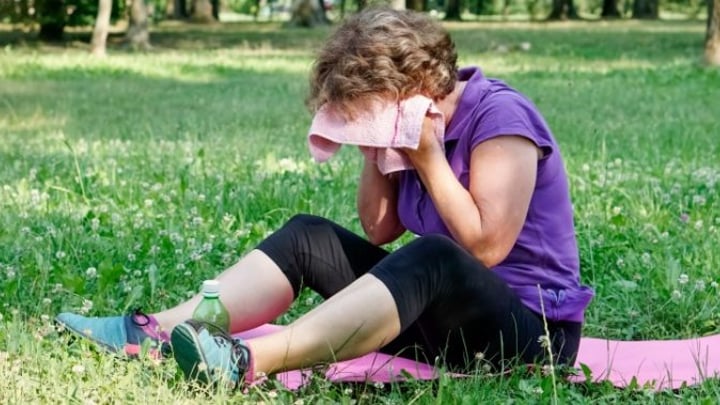 Experts warn that a brisk walk alone won't cut it when it comes to exercise as a Baby Boomer. Source: Getty

Baby Boomers are constantly being told that keeping active and exercising where possible is vital for a happy and healthy life, although new research by Australia’s national science agency found older Aussies could be making a vital mistake when it comes to their fitness. In fact, failing to flex your muscles at least twice a week could cause suffering and damage.

A survey of more than 5,600 CSIRO Total Wellbeing Diet subscribers found 65 per cent of those aged between 51 and 70 didn’t think resistance exercise was important for weight loss and overall health. In fact, just one in two adults added resistance training to their weekly exercise program.

Researchers found that while resistance exercise is important for people of all ages, it’s even more vital in the older population because they’re more prone to muscle loss. In addition to making Boomers stronger, it can also help prevent an array of health conditions including osteoporosis, type 2 diabetes and heart disease.

“With millions of Australians living with two or more chronic diseases, it’s critical that people exercise as they age to sustain their health and quality of life,” CSIRO Principal Research Scientist Professor Grant Brinkworth said in a statement.

Two-thirds of people aren’t aware of the Australian Physical Activity Guidelines – which recommends adults be active on most, if not all, days. Just 7 per cent of participants knew of the guidelines and that at least two muscle-strengthening resistance exercise sessions are recommended each week. In addition, 77 per cent thought a brisk walk was the best way to lose weight.

“Resistance training involves working your muscles against some form of weight or force, such as your own body weight,” Brinkworth said. “It increases muscle strength and plays a key role in body composition changes important for weight management, particularly for women who lose proportionately more lean muscle tissue than men when losing weight.

“This can slow down the metabolism, which works against weight loss efforts.”

Read more: From health to social benefits: The pros of staying active as a Boomer

Mixing regular resistance training with a diet high in protein can result in more weight loss that a high-carbohydrate diet with exercise or just diet alone. And, while many avoided resistance training because they hate going to the gym, a busy schedule or fear and injury, Brinkworth said these types of exercises can be done from home.

“It is not necessary to go to a gym for a good resistance workout – you can easily do this in the comfort of your own home, even by just using your own bodyweight for resistance,” he said.

The latest advice comes a month after research published in the Lancet Global Health Journal found as many as 1.4 billion adults around the world are shunning physical activity at the risk of their heath. That number, which reflects more than a quarter of the world’s population, found a lack of exercise can greatly increase the risk of cardiovascular disease, type 2 diabetes, dementia and even cancer. While there’s been plenty of research and a push for Boomers to get active, there hasn’t been an improvement to physical activity levels since 2001.

The World Health Organisation recommends at least 20 minutes of moderate-intensity per day or a minimum of 10 minutes of vigorous-intensity physical activity per day. Of course, for Boomers with health conditions and limitations, it’s best to consult with a GP or health professional to find a fitness plan that works for your condition.

How do you like to exercise? Do you think you’re active enough?