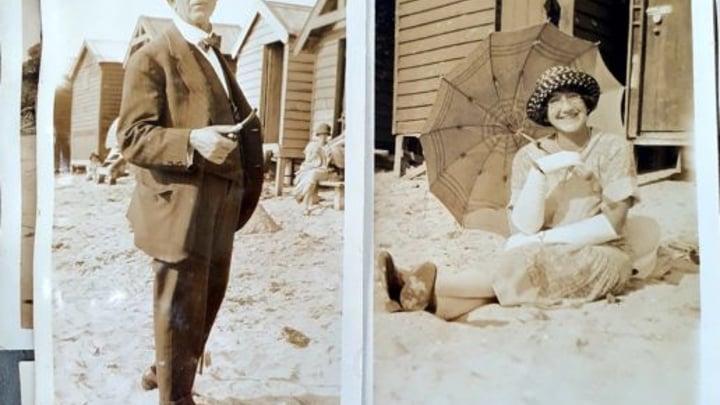 Nerrida inherited the family photo album and it was a wonderful look at the past. Source: Nerrida Blashki Pohl

Since the late-1990s I’ve been the diligent caretaker of the photo album of my late grandmother, Irma. I pulled it out for public show only once. The occasion was very special. My family, in 2008, had a large reunion for the sesquicentenary of their arrival in Melbourne.

The pages were dog-eared and the glue was loose, but the neat white writing of Irma identified everyone clearly. My great grandparents, Philip and Hannah, arrived in Australia in 1858. While Hannah was busy bearing Philip 14 little mouths to feed, Philip began hawking in the goldfields. From these humble beginnings, by 1911 he was a Justice of the Peace and appointed first chairman of Melbourne’s new City Court on Russell Street. You can read more about him online.

Grandpa Lou, born in Geelong, met and married Irma in Hampstead, London. They had six children, giving Philip and Hannah a grand total of 55 grandchildren by 1918. At the time of their holiday Lou was a member of the Victorian Chamber of Commerce and a director in the family lingerie business, L. Slutzkin of Flinders Lane. Irma loved to entertain, and while they were putting the finishing touches to ‘Fairfax’, their new St Kilda mansion with a tennis court, they took a long holiday at the posh Mount Martha Hotel.

Irma’s album covers this time and is replete with poses by many visiting relatives. The family loved posing with their new camera. I posted a few charming photos of my father’s family on social media featuring old Melbourne history.

Thanks to the National Library of Australia website, Trove, and my distinctive surname I soon found the society pages recording this grand holiday. My dad’s sisters were socialite ‘flappers’, sassy with bobbed hair and short skirts, and one was a Davis Cup tennis finalist.

Someone who liked my Facebook posting suggested that Mount Martha Historical Society might be interested. It was a brilliant idea. I took my six- and eight-year-old grandsons to meet the historian, and they shivered as they wandered the corridors where their great great grandparents had holidayed 99 years ago.

Young Max, while watching the contents of this precious album being scanned, asked about the Aborigines. Without missing a beat Gill, the historian, explained that as it was cold they made their own houses.

Happily for the historian, this album is full of fabulous fashions and has rare photos of it’s tiny conservatory. You can see my grandpa Lou with bowler, bowtie and pipe. He and two brothers had been Bourke Street tobacconists in the Colonial era.

Irma dressed for the beach in kid gloves. The family ‘nanny’ was on-hand to take care of practical matters and their chauffeur makes a few appearances with his Chevy.

There are many glamour poses of my aunts and uncles. They all enjoyed tennis, golf, swimming, polo and fancy dress parties. My father, Arnold, is under five in some very cute photos. I’m glad that the public will now be able to enjoy these photos.

Who holds all the photos and records of your family history? What have you learned about your family from old photos?