‘Fond memories of my mother and her early life in India’ 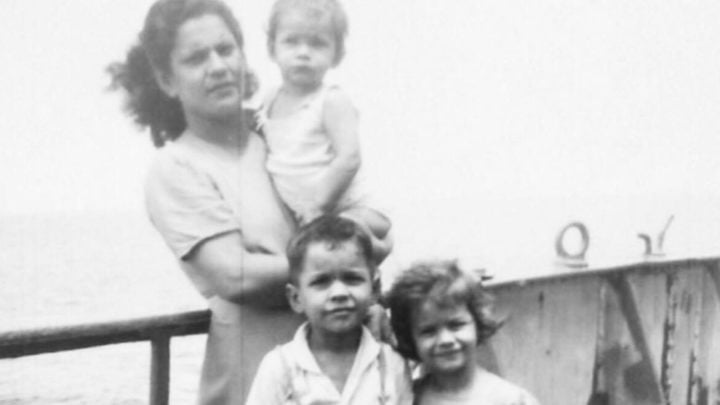 Heather with her mother and siblings on their way to Australia in the 1950s. Source: Kel Meade

My mother’s stories were so wonderful to listen to. She was born in India — my grandmother and grandfather were Irish and had come to India after they were married — and she worked on the telephone exchange there before she met my father, who was in the British Police Force.

We’d often have my father telling us the stories about his life in India and then Mum would share the stories about how Dad would come to court her. I remember her saying that she had a pet spider monkey (not uncommon in India in those days) and when my father would come to visit the monkey would run out and bite him on the ankles. One day he’d finally had enough and he put the monkey in a basket on his bicycle and pedalled away with it, leaving it at the side of the road, before returning to Mum’s house. Within a few hours the monkey had returned, so the next time Dad visited he bundled it up again and pedalled further away. The monkey disappeared for good after that. However, my mother never knew of what my father had done until years later.

My mother was a terrific hockey player. One day, after she and my father had started dating, she thought she saw him canoodling with another woman. The next time she saw him she yelled: “Let me tell you this, no more shenanigans”, and she whacked him with the hockey stick. There mustn’t have been any more mischief because they got married after that.

Because of my father’s job, they were given servants at the house but Mum would not let them cook the meals, restricting them to housework. Instead, she got my grandmother to teach her how to cook and, following her instructions, she would create the most fantastic meals. To this day I have never eaten anything like Mum’s curries; lentils and pea, potato, Kofta beef vindaloo … She made pakoras using pea flour, onions and chilli that were so tasty. I remember her dried fish that would be grilled and then crumbled over the curries and how unusual that it should be called ‘Bombay Duck’. There were many sweets too!

My grandmother must have been preparing my mother for a life without servants. She ensured Mum knew how to cook. The roly poly pudding that was wrapped in linen and then steamed, which we ate with golden syrup, was something I fondly remember.

Mum also told me the story about the time when she and three of my siblings were travelling by train. The trains were packed and people were sitting on the roof. Dad was there too and he’d taken his gun off and had placed it on the table. Mum had her hand resting near the window when she suddenly felt something tugging at her wedding finger. Without a thought, she grabbed Dad’s gun and fired it, hitting the roof. Apparently someone was trying to steal her wedding ring. Mum’s shot missed its target and fortunately didn’t hit anyone sitting above, but Dad was still in shock.

My parents had seven children. My third oldest sibling died at eight months due to smallpox, but it was shortly after that Mum discovered she was pregnant with me. I like to think that we were two souls passing each other. My sister passed away on the 11th and I was born on the 11th November at 11am.

My mother was fantastic. She even went on to adopt a baby boy after she had had seven children of her own.

When we left India, Mum was devastated to be leaving her mother behind. She was also upset about being so far away from her daughter’s grave. My brother tried to find the cemetary on a visit to India, but it was long overgrown.

When she passed away we played her favourite song, ‘You Are My Sunshine’, at her funeral. I hope I never forget the memories I have of her.

Did you have a strong bond with your mother? What memories of your parents do you have?