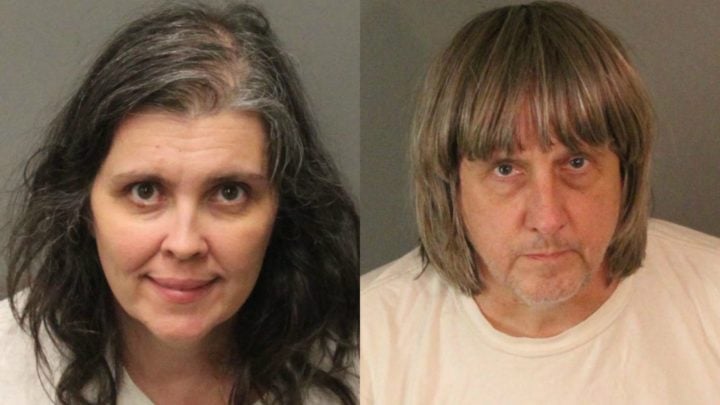 David and Louise Turpin were sentenced to life in prison on Friday (local time). Source: Getty

David and Louise Turpin have been sentenced to life behind bars for subjecting 12 of their 13 children to years of horrific abuse and neglect.

The Californian couple learned their fate on Friday after some of their children read out devastating victims statements in court in which they recalled the shocking abuse they were put through under their parents’ roof. Despite their suffering, one of their daughters asked for a lighter sentence, saying her parents thought they were acting in their children’s best interest.

The couple pleaded guilty in February to neglect and abuse after one of their daughters escape their home in 2018 and called 911, alerting authorities to her and her siblings’ plight for the first time.

According to the ABC, one of their daughters entered the courtroom in tears on Friday before recalling the horrific conditions she and her brothers and sisters were forced to endure.

“Life may have been bad but it made me strong. I fought to become the person that I am,” she said.

“I saw my dad change my mom. They almost changed me, but I realised what was happening … I’m a fighter, I’m strong and I’m shooting through life like a rocket.”

The BBC reports that another sibling told the court he is still haunted by his childhood and the conditions he grew up in.

“I cannot describe in words what we went through growing up,” said his statement.

“Sometimes I still have nightmares of things that had happened such as my siblings being chained up or getting beaten.

“That is the past and this is now. I love my parents and have forgiven them for a lot of the things they did to us.”

The world was shocked when reports of the Turpin parents’ sick abuse first emerged, with police revealing they found three children chained up in the house and others severely malnourished. Riverside County District Attorney Mike Hestrin later revealed the children had been forced to urinate and defecate in their chains and that the house smelled of human waste when police swarmed the property in 2018.

Although the Turpins had legal permission to home school their children, most were uneducated and one of their daughters, who was 17 at the time, told police she hadn’t finished the first grade.

Hestrin said one female victim who was 29 at the time they were discovered weighed just 37kg, while a 12-year-old was the size of an average seven-year-old.

Both parents also read statements in court on Friday, saying they were sorry for what they’d done and that they loved their children very much.

In March, Elizabeth Flores, the sister Louise Turpin, revealed that she visited her brother-in-law in prison and that he wanted his kids to forgive him.

Flores told Radar Online, the family patriarch was worried he would never see his children again.

“He was telling me that no matter what happened with him, he hoped that he still had a relationship with his kids,” Flores told Radar Online. “That’s what he kept worrying about.”

The older children are now living independently and adjusting to their new-found freedom, while the younger are living in foster care.

According to attorney for seven of the Turpin children Jack Osborn, the siblings all remain close and are supportive of each other’s recovery.

Have you been following this story over the past year?