‘This was a hard one’: Snakes’ clever hiding places leave catchers stumped 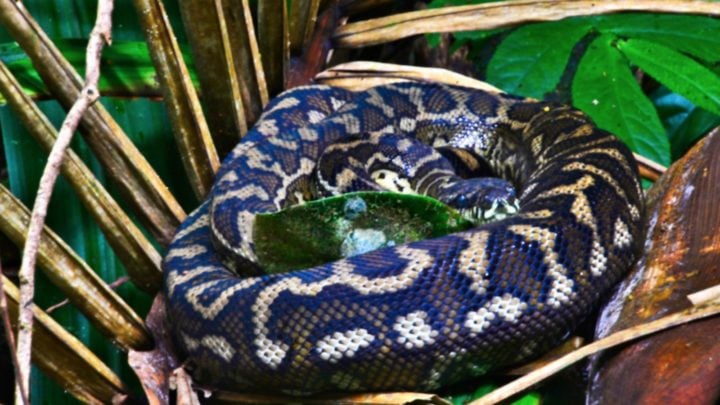 One of the photos showed a python hiding. (Stock image).

A group of snake catchers were left stumped when they were sent two separate photos of snakes hiding in unusual places – and they’ve sparked a huge reaction online as people try to guess where they are.

Brisbane Snake Catchers regularly share photos from their call outs, but two recent ones proved harder than they were expecting.

In the first photo, a resident has taken a snap of their overgrown hedge running along their fence, with no immediate sign of a snake at all.

Posting it online, the group challenged fans to try and spot the reptile with almost none getting the right answer straight away.

While one person claimed to see one lying along the bottom of the fence, another said they’d had to give up because they were beginning to strain their eyes.

Meanwhile one wrote: “Makes me wonder just how many snakes I wander past every day and not realise it.”

Luckily, seeing the stream of confused responses, the group posted a second photo – sent to them from the resident – pinpointing exactly where the snake was.

They then followed it shortly after with one of the snake slithering along the driveway, confirming what type and size it was – a tree snake.

Meanwhile, it seemed to be a theme for the group as – seeing the huge response – they then shared an even harder ‘spot the snake’ photo on their page – and this one proved almost impossible.

This picture showed the inside of someone’s home with tools hanging on a brick wall, pictures on the wall above them and a corrugated iron roof with bottles hanging down – seemingly a great room for a snake to disguise itself.

Aware this one would be harder, the group dropped a hint by writing: “Can you guess where this sneaky snake is hiding.? I’ll give you all hint this time.. it’s a python.”

Once again fans rushed to share their answers, with over 1,000 people weighing in on the debate within a matter of hours.

While some claimed to spot the shape of a python around different parts of the room, the group shot each of the answers down one by one, before eventually admitting it took them a while to find it too.

They added: “Ok the second hint is this.. its a yearling Python so this means it’s too big to fit into say a can or around keys.”

Sure enough, after more people attempted to see even a hint of the python, they finally gave the game away by circling a tiny hint of the snake’s head with a love heart shape.

Snake catcher Lauren later followed it up with a photo of the snake trying to make a quick escape after realising it had been spotted.

“This carpet python’s nose was poking just over the ledge as soon as it’s cover was blown it slithered out of its hiding spot to make a quick get away.!” she wrote.

“Everyone is still right in a way.. we’ve caught many snakes from all the spots you’ve all mentioned, now you know where to start looking if you ever feel eyes on you… nighty night everyone.”

Did you spot either of these snakes?