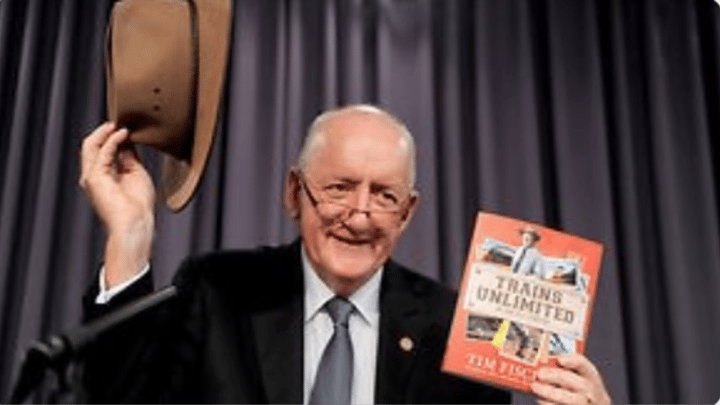 Former deputy prime minister Tim Fischer has died at the age of 73 following a decade-long battle with cancer – just days after it was revealed he was “gravely ill” and being treated in Albury Wodonga Cancer Centre, according to multiple reports.

Meanwhile, PM Scott Morrison shared a photo alongside his own tribute, writing: “Tim Fischer was a dear friend. Jenny and I are deeply saddened by Tim’s passing. Tim Fischer was a big Australian in every sense of the word. Big in stature, big in his belief, big in his passion, big in his vision for what Australians could achieve… And big in his view of Australia’s place in the world. As a result, Tim Fischer will forever cast a big shadow on our nation. Jenny and my thoughts and those of our entire nation are with Tim’s wife Judy, their sons Harrison and Dominic and his extended family and many friends.”

Thank you Tim, we loved you very much. pic.twitter.com/RfUnIXysbH

Leigh Sales added: “I’ve been thinking a lot about Tim Fischer this week and the words that keep coming to mind are uncommon decency. He cared so much about policy issues that affect Australian lives, especially for people outside the cities. He was a lovely person. Vale.”

While Andrew Leigh added: “Tim Fischer has passed away. He did many things in his career, but I’ll always remember him as the man who stood up to the extreme right to pass gun laws that still save around 200 lives every year. Here he is at the 2018 launch of Parliamentary Friends of Gun Control. #auspol.”

Tim Fischer has passed away. He did many things in his career, but I'll always remember him as the man who stood up to the extreme right to pass gun laws that still save around 200 lives every year. Here he is at the 2018 launch of Parliamentary Friends of Gun Control. #auspol pic.twitter.com/5U7vVfClsS

Meanwhile several fans shared their thoughts on social media, with one writing: “Much saddened to hear of the passing of Tim Fischer. A wonderful Australian with a heart of gold. RIP,” while another added: “Vale Tim Fischer. Even when I disagreed with you, you were always one of the very few politicians who seemed more concerned with his constituents and the country than with your own fame or profit.”

The 73-year-old, who has faced a tough fight with acute leukaemia for 10 years, revealed just months ago that he had turned to chemotherapy to fight the disease. And ABC News Breakfast host Michael Rowland took to social media on Tuesday morning to share an update on his condition and sent his best wishes to the much-loved former politician.

In a post shared on Twitter he wrote: “My thoughts this morning are with former deputy PM Tim Fischer, who is gravely ill in Albury hospital. I am told he is putting up a brave fight. That’s the Tim everybody knows.”

It followed an initial report by The Australian claiming Fischer was gravely ill, suffering from the effects of his 10-year cancer fight.

My thoughts this morning are with former Deputy PM Tim Fischer, who is gravely ill in Albury hospital. I am told he is putting up a brave fight. That’s the Tim everybody knows. 🙏 pic.twitter.com/D7WUdEvsNg

Late last year Fischer appeared on ABC’s Australian Story where he admitted his prognosis was “not good”, with hope and prayer keeping him strong throughout the difficult time.

“It’s as it is. At three score plus 12, you take the cards that you’re dealt with and hope and pray,” he told the program back in November. It’s not the ex-politician’s first cancer fight as he was previously diagnosed with bladder cancer, prostate cancer and two melanomas – however this is the most serious.

Tim revealed on the show he believed the health blow could be down to exposure to the chemical Agent Orange during his service in Vietnam in the 1960s.

Meanwhile, his son Harrison, who has been diagnosed with autism, found it more difficult to discuss his father’s condition. He told the show in November: “I struggle to think about what he says with that, because it’s a bit sad that Dad’s not well and he could die any day, probably … It makes me feel really upset.”

“It was shattering, it was disappointing, it was challenging. And initially I pushed back against it in a somewhat crazy way,” Tim explained on Australian Story.

“It led to Tim realising he also had a mild form of autism himself, having had an unusual lifelong fascination with railways and transport. For Harrison, that fascination lies in politics – but unlike his father, he’s a Labor supporter.