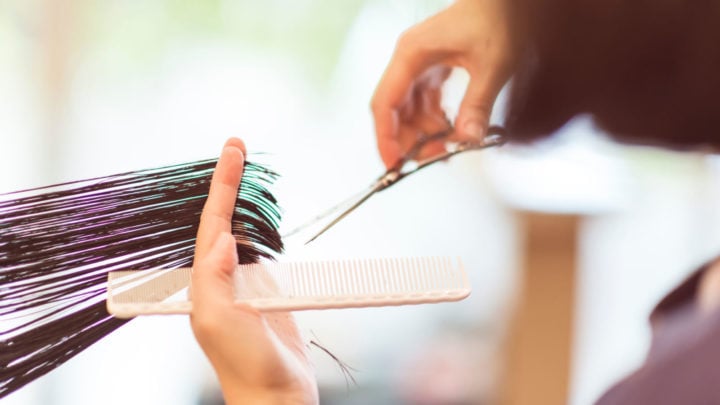 Hairdressers will no longer be limited by the strict 30-minute time limit. Source: Getty.

Prime Minister Scott Morrison announced this morning that the government has backflipped on its decision to impose a 30-minute time limit for hairdressers and barbers, following backlash from the Australian public.

The rule, which was announced on Tuesday evening alongside a host of other tighter restrictions, including the closure of beauty salons, was slammed by professionals in the industry and members of the public alike.

Now, the prime minister has revealed that the government has lifted the curtailment, effective immediately, however all salons must still strictly adhere to the social distancing guideline of allowing 4sqm per person in an enclosed space.

“Following the receipt of feedback on the practical implementation of measures announced regarding barbers and hairdressers it was agreed by Premiers and Chief Ministers at National Cabinet last night that the instruction regarding 30 minutes per patron will be lifted (effective immediately), but that the 4sqm rule per person must be strictly observed within the premises and that personal contact during the patron’s visit should be minimised wherever possible,” Morrison said in a statement this morning.

He added: “Also it was noted that in hardship cases, States and Territories can provide exemptions in relation to attendance at funerals, but only at the margin.”

Many Australians questioned the measure, asking whether it was in fact more risky for hairdressers and barbers to see a higher volume of clients for 30 minutes each.

One person wrote: “Can someone please explain the hairdresser rule? Wouldn’t it be less risky to be in close contact with one customer for two hours than four customers for half an hour each?”

Another commented: “Radio just said the 30-minute rule for trips to the hairdresser has been scrapped. Good. It was very silly. And I’m saying that as someone whose haircuts sometimes take as long as 15 minutes.”

The time limit was announced late on Tuesday evening, along with a host of other stricter measures intended to slow the spread of coronavirus across the country. All were set to come into effect at midnight on Wednesday.

Speaking just two days ago, Morrison said foods courts in shopping centres would be closed to eat-in customers but permitted to serve takeaway meals, while personal services including beauty therapy, tanning, waxing, nail salons, and tattoo parlours were all forced to shut their doors from midnight last night.

All libraries, museums and galleries have also now closed, as have amusement parks, arcades, swimming pools and children’s play centres.

Weddings may continue, but only with the couple, the celebrant and witnesses, totalling a maximum of five people. Funeral congregations are limited to no more than 10 people, while personal training and boot camps are also now limited to a maximum of 10 people.

The national cabinet is scheduled to meet again on Friday, March 27.

Do you think it's the right decision to drop the rule? Do you think 30 minutes was infeasible?