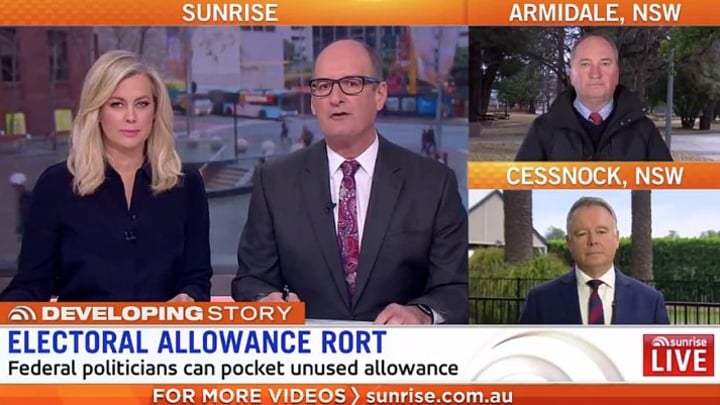 David "Kochie" Koch got into a heated debate with Barnaby Joyce and Joel Fitzbiggon over an additional allowance politicians are granted on top of their salary each year. Source: Twitter/ Sunrise

Sunrise presenter David ‘Kochie’ Koch has slammed an expenses “rort” in a fiery exchange with Barnaby Joyce and Joel Fitzgibbon, after it was revealed Australian politicians can pocket up to $46,000 extra a year on top of their annual salaries.

The host of the morning program hit out at the politicians, who claimed they’re perfectly entitled to the annual electoral allowance that is given to each senator and MP in the country. As well as their impressive base salary of around $201,700, politicians are granted an additional electoral allowance of between $32,00 and $46,000 to be used for engagement with constituents, The Daily Telegraph reports.

While this is meant to go towards those specific expenses, there is currently no monitoring of where the money goes, meaning politicians are legally allowed to claim any unspent funds as part of their yearly income.

On Monday morning the Sunrise team delved into the topic, with both Joyce and Fitzgibbon defending the allowance when asked if any changes should be made.

“I’m all for transparency and accountability,” Fitzgibbon replied. “At a time when we’re denying pensioners proper pension payments, cutting back penalty rates, we need to demonstrate to the Australian people that we impose the same sort of discipline on ourselves.

.@Barnaby_Joyce and @FitzHunter defend politicians pocketing unused electorate allowances, which critics say is a “rort” that would not be tolerated in the private sector. pic.twitter.com/kUhqunmCHL

“But this is a really difficult area. You need to pay politicians enough to attract good people to the career and ensure the costs involved are covered.”

The politician continued by explaining how companies would struggle to hire CEOs on a $200,000 salary if one of the conditions was for them to attend multiple expensive functions throughout the week.

“But that’s a work thing,” Kochie hit back. “You put the receipt in and get reimbursed.”

To which Fitzgibbon replied: “No Kochie. If the CEO goes to a dinner, the company pays. The problem you have here, of course, is reconciling these things.”

Kochie kept the heated debate going claiming: “I’m not saying the government shouldn’t pay. I’m just saying when the CEO goes to dinner and wants to claim it back he puts a receipt in – he doesn’t just get given 40 grand a year.”

The tables then turned to former deputy prime minister Barnaby Joyce who echoed Fitzgibbon’s thoughts, claiming they need the extra allowance to ensure the right person is in the job.

“No employee stands back and says they are not entitled to what they are being paid. No person at Channel 7 will say that,” he chimed in.

Joyce continued: “Sure, when you’re prime minister you’re on a very good wicket, but when you’re trying to attract base talent you have to have a mechanism to get people in.

“It’s stupid for any employee to say ‘I’m paid too much’. You’ll be a really popular person for 10 minutes, then you’ll get paid less and life will go on.”

Despite their strong views, neither Joyce nor Fitzgibbon could give an estimate on how much of their allowances they use annually and if they have any leftover.

Their comments follow an angry outburst from outgoing senator Derryn Hinch who said the allowance should be more strictly managed and politicians should not be allowed to claim unused funds as their own.

“I was amazed when I first came to Canberra and was told the electoral allowance was an allowance,” he told The Daily Telegraph.

“They said if you don’t spend it, you can declare it as income. They were quite open about that.”

Defending his own use of the funds, Hinch said he used the allowance to help fund an oven for a men’s shed and vouchers at Lifeline over the Christmas period to help women in refuges.

Do you think politicians should be allow to pocket any of the unused allowance? Or do you believe the government should be more strict when it comes to what the money is used for?