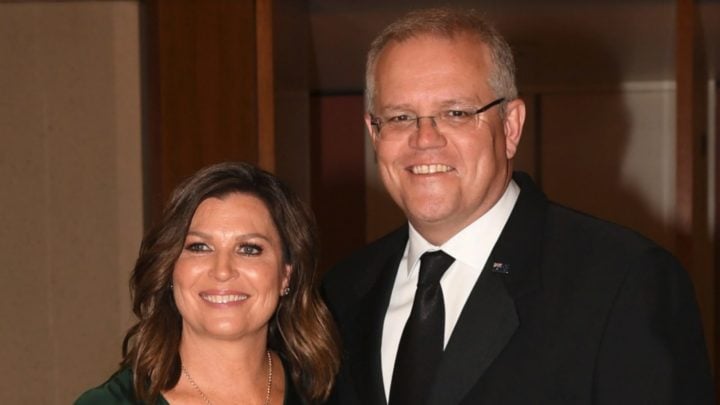 Jenny Morrison has revealed her struggle to have children left her feeling "depressed". Source: Getty.

Scott Morrison’s wife Jenny has opened up in a very personal speech to recall her 14-year struggle to have children – admitting it was “isolating” and left her feeling depressed, despite her PM husband’s incredible support.

The 51-year-old Australian first lady reportedly described her battle to conceive as the “holy grail” in front of 350 people, at an event hosted by the Australian Jewish Fertility Network (AJFN) at the Chauvel Cinema in Sydney’s Paddington on Wednesday. Jenny went through around 10 rounds of IVF treatment, as well as undergoing microsurgery for endometriosis, before finally welcoming her first daughter at the age of 39.

“You do feel very isolated,” she admitted at the event, according to The Daily Telegraph. “Scott could cope with it far easier because he’s just a really hard worker and he’s obsessive about work – he could throw himself into that, still sad inside, but he could occupy himself far better.”

She added: “But for me, it was the holy grail. Everything for me revolved around wanting to have a baby and when you can’t have that… it’s like a natural thing that everybody else can do but you are unable to.”

While Jenny said it was clear to her that her husband wanted children, he always remained positive and constantly told her that she was enough for him to be happy. She recalled he would often say: “You are enough… I don’t need you to have children.”

“I did feel at some points it was way more important to me than it was to him and he was so gorgeous, he said to me, ‘You are plenty enough, we don’t need the children’ but of course he wanted children,” she added, according to the news outlet.

After welcoming their first daughter Abbey Rose, now 12, in 2007 they went on to have another daughter Lily just two years later. They conceived naturally after Jenny opted to have surgery to remove scar tissue from her fallopian tubes, liver and bowel. She had been suffering from endometriosis, a condition which leads to a higher risk of infertility.

Meanwhile, she was joined for the Conversations for the Soul event by former Studio 10 star Jessica Rowe’s husband Peter Overton, who also recalled their own struggle to have kids. Meanwhile comedian Mary Coustas also spoke of her 23 failed IVF attempts in the moving conversation.

Scott and Jenny Morrison are childhood sweethearts who met at Luna Park when they were 12 and started dating at 16. The PM made reference to the couple’s IVF struggles in his maiden speech previously.

He said at the time: “To my wife, Jenny, on Valentine’s Day: words are not enough. She has loved and supported me in all things and made countless sacrifices, consistent with her generous, selfless and caring nature.

“However, above all, I thank her for her determination to never give up hope for us to have a child. After 14 years of bitter disappointments, God remembered her faithfulness and blessed us with our miracle child, Abbey Rose, on the seventh of the seventh of the seventh, to whom I dedicate this speech today in the hope of an even better future for her and her generation.

Did you struggle to have children? Can you relate to what the First Lady is saying?