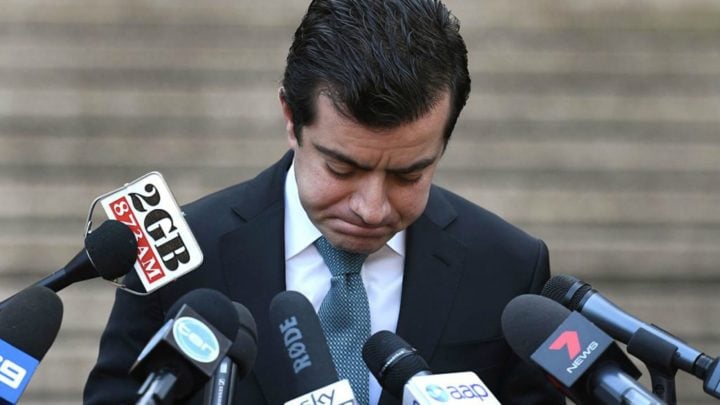 Disgraced former Labor Senator Sam Dastyari has spoken out about the infamous scandal that destroyed his political career ahead of his appearance on I'm A Celebrity... Get Me Out of Here! Source: Getty

Disgraced former Labor Senator Sam Dastyari, who resigned from office in 2018 — after it was revealed he asked a donor with links to the Chinese Communist Party to cover a travel bill in excess of $1600 — will head to the South African jungle this week.

In an exclusive interview with The Sydney Morning Herald, the 35-year-old father-of-two is evidently taking responsibility for his actions and has spoken out about the infamous scandal ahead of his appearance on I’m A Celebrity… Get Me Out of Here!

Dastyari said the real reason he wanted to enter the jungle was to make his two children proud, who will soon be old enough to read about his downfall in politics.

“In a period of time my daughter, Hannah, will be old enough to read the internet and read all the bad decisions I’ve made in the past, but I hope she will see the other things out there and if that means eating a spider or lying in a snake pit then so be it,” he told the publication.

Dastyari, who served in the Senate between 2013 and 2018, was sacked as deputy Senate whip by Labor leader Bill Shorten in November after the ABC released audio of Dastyari backing Beijing’s South China Sea policy, in opposition to Labor’s stance on the issue.

“I see this opportunity as a way with dealing with things – and nothing can be worse than what’s going on inside my head.”

He said he wasn’t looking for forgiveness or acceptance from the public, adding: “I just want to spend a day not hating myself so much.”

“There is no resurrection, no rebranding, no comeback, second or third act from all of this. I am not looking for a return to politics.”

It comes after Dastyari sat down with Joe Hildebrand for Stellar magazine and opened up about the immense relief he felt when he resigned from parliament, over his links to China.

“The moment I resigned from Parliament was probably the best I’ve ever felt in my life,” he said. “Just the euphoria of relief. I’ve done every drug under the sun, and they were all beaten by the euphoria you get from that relief.”

The full cast will be revealed when the show premieres this Sunday, January 13 on Network 10.

What do you think? Was Dastyari right to resign from politics? Will you be watching I’m A Celebrity… Get Me Out of Here! tomorrow night?