‘Like a bomb going off’: Woman dies after tree falls on car amid wild NSW winds 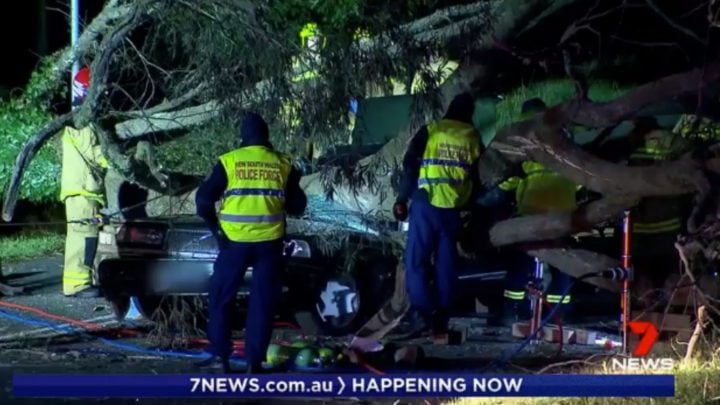 A woman has died and a man hospitalised after a tree collapsed on their car. Source: 7 News.

A woman has died and a man rushed to hospital after they were trapped when a huge tree collapsed on their car amid wild winds in NSW.

Emergency services were called to Victoria Street in Katoomba at around 7pm on Thursday night but the woman, in her 40s, sadly could not be saved.

The male driver, aged in his 20s, was trapped inside the crushed car and sustained head and chest injuries. He was airlifted to Westmead Hospital in a serious condition.

A neighbour who lives nearby described the moment the tree collapsed to The Daily Telegraph, admitting: “It was like nothing I’ve heard before, like a bomb going off.”

“It doesn’t look good, it’s a nasty accident,” she added.

Power outages hit the nearby area following the incident, while police were forced to close the road to launch the rescue mission to free the man trapped inside – with Police Rescue, Fire & Rescue NSW, and NSW Ambulance paramedics all joining forces.

If you're not a fan of the #cold you may not love this pic. We've already seen strong #winds & cool #temperatures but that's the tip of the iceberg. A big pool of cold air is coming across from the Bight as a stronger front moves in. #Warnings are in place https://t.co/ALGYpIWNju pic.twitter.com/jwWhQUs350

“Officers from Blue Mountains Police Area Command established a crime scene and commenced inquiries into the circumstances surrounding the incident,” NSW Police added in a statement.

It comes as the Bureau of Meteorology issued a severe weather warning for south-eastern NSW, as well as Illawarra, Southern Tablelands, Snowy Mountains, Australian Capital Territory and parts of South Coast, Central Tablelands and South West Slopes Forecast Districts, as a second cold front makes it way across the country bringing savage conditions and strong winds which could last until Saturday.

Damaging winds are expected to average 60 to 70km per hour, with peak gusts of over 90km and, according to the Sydney Morning Herald, NSW SES volunteers responded to 54 calls for assistance due to fallen trees across the Blue Mountains on Thursday alone.

“Friday and Saturday will be windy across much of the state, particularly eastern parts,” Bureau meteorologist Gabrielle Woodhouse told the news outlet.

“The weather warning could be extended to include the Sydney metropolitan area – it’s touch and go at the moment.”

She added: “It’s going to be very windy for the next few days [but] by Saturday night we will see an easing trend on those winds… Overnight temperatures will be significantly cooler than what we’ve been experiencing. The windchill factor will make it feel much colder – it’s a good thing to be rugged up.”

Are you caught up in the severe weather?