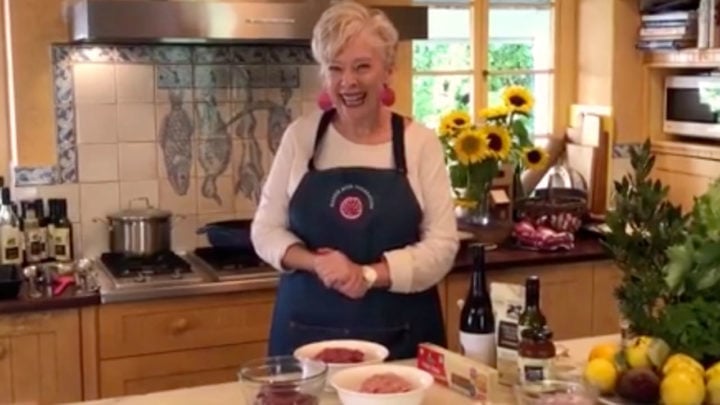 Everyone has that go-to recipe they have perfected over time, by adding in new ingredients and tinkering with the taste, and the same goes for celebrity chefs it would seem as Maggie Beer shared the secret to her delicious bolognese sauce recipe this week.

And while most of us might rely on tomatoes, onions, carrots and even milk to achieve that classic Italian-inspired taste, the Barossa-based cook revealed she likes to add something a little different to her spaghetti sauce – chicken livers.

Maggie, 75, unveiled her unusual secret ingredient during a recent episode of her ‘Cooking with Maggie’ video series as she invited fans into her kitchen – virtually, of course – to watch her whip up the tasty dish, and learn how to make it themselves.

“Today we’re going to have some comfort food,” Maggie says at the start of the 15-minute video. “I can just imagine anyone wanting to eat this … because I’m making a spag bol. And it has a twist, of course!”

To the hot pan she adds fresh bay leaves, thyme and mince meat (beef and pork), which she cooks in batches until all of the meat is browned. Once the meat is cooked, she adds everything – including the onion and garlic – back into the pan, along with tomato paste, one cup of red wine and stock. She then allows the bolognese to simmer for around one hour.

The last step is to chop up the chicken livers and mix them through the meat sauce. Maggie then serves the rich bolognese over cooked pulse spaghetti.

Today we're going to cook some real comfort food; Spaghetti Bolognaise….with a twist of course!! As I am wearing my @maggie_beer_foundation apron I will tell you a little about the important work we do at the Foundation as we go. Happy Cooking! #cookwithmaggie

Many of Maggie’s fans couldn’t wait to give the recipe a go themselves and thanked her for sharing it, with one writing: “Oh yum I love chicken livers I can eat them still pink in the middle with salt and pepper, never thought to put them in my spagg sauce but will be doing that from now on Maggie.”

Another commented: “Thank you Maggie, I will add chicken livers to my next Bolognese.” While another wrote: “Maggie I cannot thank you enough for sharing your love of cooking. I have never added chicken livers before and I’m going to try. Can’t wait to taste. Thank you again.”

Since lockdown began, Maggie has shared a number of video tutorials on her social media accounts and taught Australian home cooks how to make the likes of pumpkin risotto, fish and potatoes, bread and butter pudding, and even homemade mayonnaise.

She announced the new project at the start of April and has since released a new video on her Facebook and Instagram pages every day, showing people how to create impressive meals using pantry staples, and in just 20 minutes.

Do you enjoy cooking? Are you a fan of Maggie Beer's recipes?