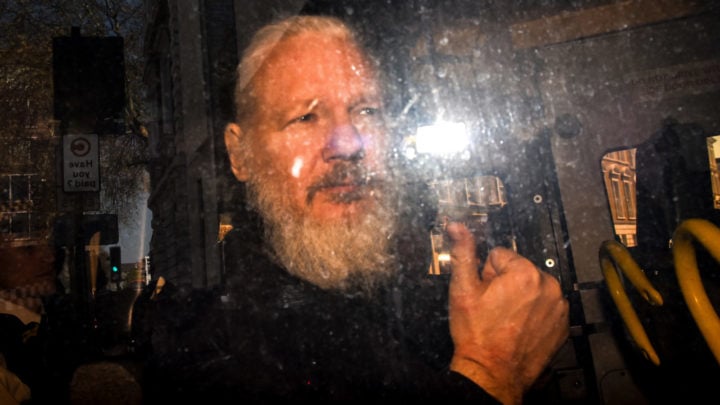 Wikileaks founder Julian Assange makes his way into the Westminster Magistrates Court after being arrested by Metropolitan Police, on behalf of US authorities. Source: Getty

WikiLeaks co-founder Julian Assange has been found guilty of breaching bail in a British court after a dramatic arrest at the Ecuadorean embassy.

The 47-year-old was taken into custody and arrested by Metropolitan Police officers on Thursday for failing to surrender to the court back in 2012. He was further arrested on behalf of the United States authorities after arriving at the central London police station.

Assange has been hidden away in the embassy since 2012 after British courts ordered his extradition to Sweden to face questioning in a sexual molestation case, the BBC reports.

The case was dropped but supporters have said in the past, Assange feared leaving the embassy in case he was extradited to the US where he was wanted in relation to an alleged conspiracy with Chelsea Manning.

According to the BBC, the former US intelligence analyst was arrested in 2010 for disclosing more than 700,000 confidential documents to Wikileaks.

In a statement released by Metropolitan Police Services it was confirmed officers were invited into the embassy on Thursday “on behalf of Westminster Magistrates’ Court”.

Upon appearing in court Assange was found guilty of breaching bail in 2012 with Judge Michael Snow describing him as a “narcissist’.

“His assertion that he has not had a fair hearing is laughable. And his behaviour is that of a narcissist who cannot get past his own self-interest,” news.com.au reports he said in court.

According to the publication Assange is set to be sentenced in relation to the charge on May 2.

In a sovereign decision Ecuador withdrew the asylum status to Julian Assange after his repeated violations to international conventions and daily-life protocols. #EcuadorSoberano pic.twitter.com/pZsDsYNI0B

“The aggressive and discourteous behaviour (of Assange), the hostile and threatening declarations of its allied organisation against Ecuador, and especially the transgression of international treaties have led the situation to a point where the asylum of Assange is unsustainable and no longer viable,” Moreno said.