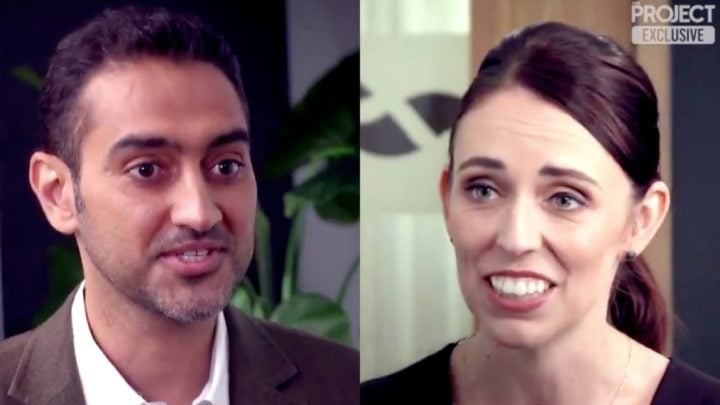 Jacinda Ardern has opened up about how she’s doing in the wake of the Christchurch terror attack, and says New Zealanders don’t blame Australia for the horrific attack — despite the alleged gunman being an Australian man.

Speaking to The Project host Waleed Aly on Monday night, the NZ prime minister said it took her “some time” to process that an Australian was behind the attack.

“But again, New Zealanders are reflecting on the fact that it was not one of us because in part that helps them process what has happened here,” she said. “But they do not point it out in an attempt to blame, that is not why it is raised.”

When asked how she was coping, Ardern said: “The answer is I’m deeply sad. There are moments when there aren’t cameras around… it’s fair to say those are very emotional moments.”

Following the attack, the NZ prime minister admitted that she hasn’t spent much time with her family.

“At the moment, my time with them probably wouldn’t be quality because I feel such a draw to be focused on doing what’s needed for those who have lost loved ones.

“Too much else feels a bit selfish right now,” she added. “But I’m the last one that anybody should be worried about.”

Ardern also restated once again that the shooting should be referred to as what it is — a terrorist attack.

“We have to acknowledge that this kind of targeting has happened before,” she said. “And so that is why our language is very deliberate. This is a terrorist attack.”

Last week, Waleed travelled to Christchurch and sat down with New Zealand Prime Minister Jacinda Ardern to find out how she and her country have been coping through its darkest days… #TheProjectTV pic.twitter.com/AwFcSZBTyu

In the wake of this month’s devastating terror attack in Christchurch, Ardern has been thrust onto the world stage with many people praising the leader for her actions and words following the terror attack that saw 50 Muslim worshippers killed when alleged gunman Brenton Tarrant opened fire.

And the interview clearly struck a chord with many viewers, who were quick to tweet their praise of the NZ prime minister.

“Awesome leadership. Empathy in leaders is a great thing. Pity we don’t have that in Australia,” one commentator wrote.

Another added: “So pleased to be a kiwi tonight. What a fine PM we have in @jacindaardern, such a warm caring person, no wonder Aussies want her. She’s proudly ours.”

Did you watch the interview last night? Do you think Jacinda Ardern is a great leader?