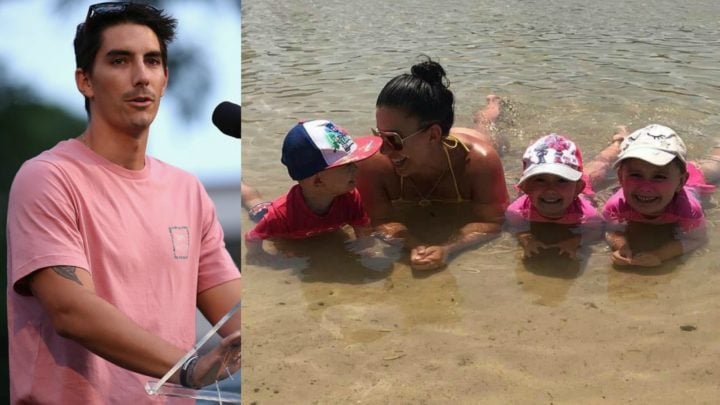 Nathaniel Clarke, left, spoke to Triple M's Big Breakfast about the moment he found out what had happened to his sister, nieces and nephew. Source: Getty/Facebook.

The lives of Hannah Clarke’s family and friends were changed forever last week when the Brisbane mum was killed, alongside her three children, in an horrific car fire that was deliberately lit by her estranged husband Rowan Baxter, who also died at the scene.

Now Hannah’s brother Nathaniel Clarke has relived the moment his world was turned upside, as he recalled the phone call he received from his wife Stacey who told him to “just come home”.

Nathaniel was working more than 1,000km away in the coal mining town of Moranbah, Qld, when the tragedy unfolded on February 19, as Hannah, 31, left her parents’ home in the wealthy suburb of Camp Hill with Laianah, six, Aaliyah, four, and Trey, three.

Speaking to Triple M’s Big Breakfast radio show on Tuesday morning, almost one week after the shocking alleged murder-suicide, Nathaniel said that while he “sort of knew what happened”, his wife chose not to divulge the full details of what had unfolded on Raven Street, despite the tragedy being splashed all over the news.

“At the time I didn’t know how big all this was,” he said. “I had been working, I wasn’t on social media or anything.

“I sort of knew what happened – there had been an accident. My wife had called me to say, look, just come home, I knew sort of what happened, I just didn’t know the whole world knew.”

When Nathaniel returned home to Brisbane, his sister was in intensive care in hospital, however she sadly passed away that evening as a result of her extensive injuries.

Nathaniel’s comments come just two days after his father Lloyd Clarke took to the stage at a vigil in Brisbane, which was attended by more than a thousand mourners who piled into a local reserve to pay their respects to Hannah and her three young children.

The father-of-two, who attended the vigil with wife Suzanne, delivered a heartfelt speech during the vigil as he revealed that he will remember the “love, laughter and joy” that his slain daughter and grandchildren brought into his life.

“This has been the hardest week of our lives,” Lloyd told the crowd at Bill Hewitt Reserve. “My wife Suzanne, my son Nathaniel and I have been overwhelmed by the number of people who have gone out of their way to offer their support and help us try to navigate that.”

Lloyd also paid tribute to his brave neighbours who rushed to help his family after Hannah’s Kia Sportage SUV was set alight as she set off to drop her kids at school. He added: “My family and I are forever thankful to our neighbours and those who were first on the scene who tried to tried to desperately help Hannah and the children.

“You selflessly and without hesitation did what you could to save them. I don’t know how we can repay such kindness.”

He added: “We are so proud 0f what our beautiful daughter Hannah achieved in her life and will never forget the joy our grandchildren brought to our lives every day. They will not be forgotten as your love and support will also never be forgotten.”