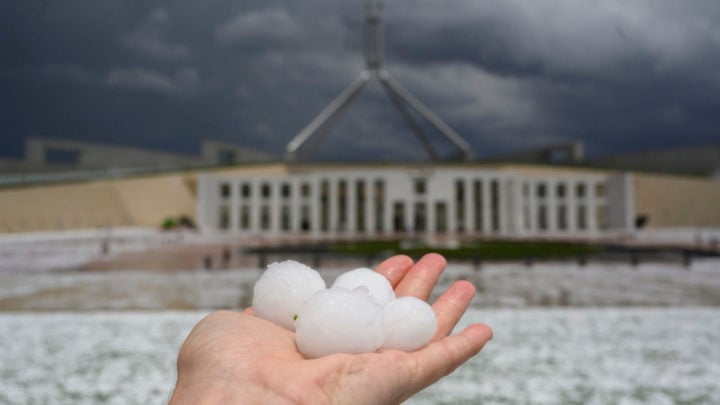 Over the weekend, parts of the country were hit by dangerous flash floods after parts of the east coast received heavy rainfall. Now people across Victoria and New South Wales are facing a huge clean-up after destructive hailstorms hit cities including Melbourne and Canberra.

Hail stones “as large as cricket balls” reportedly fell in the Australian capital on Monday after a storm hit at around midday, causing damage to buildings and cars across the city, while trees have also fallen on roads and two people suffered minor injuries as a result.

After the initial storm passed, the Bureau of Meteorology issued a warning to those in Canberra, forecasting further hail and thunderstorms throughout the night on Monday. While the ACT ESA confirmed that, as of 2.50pm, it had received more than 1,200 calls for assistance as a result of the severe storm activity.

A spokesperson said: “The ACT State Emergency Service, ACT Fire & Rescue and ACT Rural Fire Service are working together to respond to hail and roof damage, electrical threats and localised flooding. The areas most impacted include Belconnen, City and the Inner South.”

The massive thunderstorm that just hit #Canberra had hail stones as large as cricket balls. Want to know how severe it was. Thick glass roof of our building was just smashed in by hail stones. #CBR #hailstorm pic.twitter.com/hHUqcTwjzH

People took to social media to share shocking images and footage of the damage caused, with one person sharing an image of the glass roof of their office building which had been smashed in several places as a result of the weather. Another photograph showed holes in the roof of the National Film and Sound Archive after hail allegedly “punctured the roof like bullets”.

Matthew Cossey wrote on Twitter: “The massive thunderstorm that just hit Canberra had hail stones as large as cricket balls. Want to know how severe it was. Thick glass roof of our building was just smashed in by hail stones.”

As people braced themselves for possible further storm activity, many others shared images of the damage caused to cars, with one video clip showing a row of cars near Parliament House which had all had their rear windows smashed by hail. Another image showed extensive damage to a car windscreen, alongside the caption: “49 degree heat? No worries. Cricket ball sized hail? Not so much.”

49 degree heat? No worries. Cricket ball sized hail? Not so much. pic.twitter.com/AX9yITF0iv

The hailstorm came after Melbourne was lashed by freak weather on Sunday, with the State Emergency Service confirming on Monday that it had received around 1500 calls for assistance since Sunday in relation to heavy rain and hail which fell predominantly in the city’s northeast and inner east.

Hail has smashed the windows of these cars near Parliament House in Canberra. Wow! pic.twitter.com/4kEKZvqdV7

Earlier today the Bureau of Meteorology warned: “Severe thunderstorms are likely to produce large hail and heavy rainfall that may lead to flash flooding in parts of northern and central #Victoria, Gippsland and eastern #Melbourne over the next several hours.”

Sydney is also braced for extreme weather as a severe thunderstorm warning was issued on Monday afternoon, with the Bureau of Meteorology warning that “large, possibly giant” hail stones were set to hit eastern and north eastern parts of New South Wales. While damaging winds and heavy rainfall have also been forecast.

The warning is also in place for the Blue Mountains/Hawkesbury, Maitland/Cessnock, Greater Newcastle, Sydney, Wollondilly/Wingecarribee and Wollongong.

While parts of south east Queensland are also expected to experience severe thunderstorms, heavy rainfall and hail on Monday afternoon.