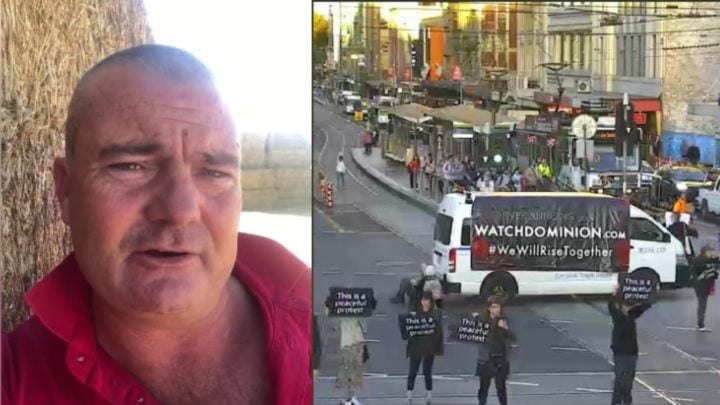 An Aussie farmer has hit out at vegan activists following yesterday’s protests, revealing he has personally received phone calls from angry vegans who disagree with his way of life.

Taking to social media, Brendan Farrell slammed activists who blocked busy city streets and entered abattoirs in a bid to highlight “the dark side of animal agriculture” on Monday, leading police to charge almost 40 people after Melbourne’s CBD was brought to a standstill, disrupting tram routes and forcing ambulances to be rerouted.

The shocked farmer, and founder of the Burrumbuttock Hay Runners group which delivers hay to drought-stricken farmers, said he’s shocked by the “bulls**t” protestors are claiming.

“Vegans are going bananas,” he said in a video shared on Facebook. “Blockades left, right and centre. Flinders Street Station’s in chaos, abattoirs chained up, people locking themselves up there, they’re everywhere.”

Farrell has been inundated with phone calls from vegan protestors, according to The Mail, including one on Monday which he said left him in fits of laughter.

“I just got off the phone… and the sheila said to me she didn’t like the last post I done on Facebook because lettuces have a heart,” the cattle farmer told his followers. “I literally s**t my pants in laughter and I don’t know what else I can say about that. Some people have just got no bloody idea.”

The farmer then took a dig at the activists, claiming he’s looking forward to eating some of the stock currently in his paddock.

“I’m out feeding my cows this morning and I tell you what there’s a steer here that’s gonna [sic] be bloody delicious at Christmas time,” he continued. “That’s just me it’s what we do.

“Next door neighbour’s running lamb at the moment, bet you he’s licking his chops too at Christmas time.”

Farrell concluded: “Anyway, I’m just gobsmacked with some of the bulls**t that is coming out of these people’s mouths and what they’re trying to achieve. It’s quite remarkable.”

His comments follows news on Monday vegan activities had wreaked havoc on cities and farms in Australia in what was described as the biggest animal rights protest in the world.

The passionate protestors came out in full force on Monday morning with groups of people converging on abattoirs and city centres, even blocking one of Melbourne’s busiest intersections.

Carrying signs and banners reading “this is a peaceful protest”, the activists were working to bring attention to film Dominion and “the dark side of animal agriculture”.

Meanwhile, Queensland Police were forced to break up a protest at an abattoir in Warwick, in the state’s south east after activists chained themselves to equipment inside the facility, Nine News reports.

Speaking about the call to action on morning program Today, event organiser Kristen Leigh said they wanted to highlight the apparent mistreatment of animals throughout the country.

The Queensland government have announced they will be issuing on the spot fines to animal rights protesters who trespass on farms with officials saying penalties will be “severe” and “to the maximum” available. #9Today pic.twitter.com/PDbrMfw1Vl

“We want to show we’re regular people who have had enough, we are killing the planet and killing animals at rates that are just unacceptable,” she explained on Monday morning.

“And drastic times call for drastic measures so that is why we’re here today. We have nine teams around Australia that are going to places of violence to draw attention to them directly.”

Have you been following this story? What are your thoughts on the recent protests?