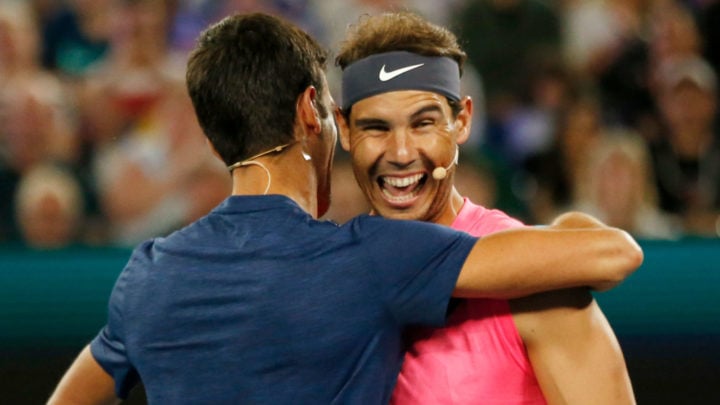 Some of the biggest names in tennis joined forces on Wednesday to raise funds for bushfire relief efforts across the country, including Roger Federer, Novak Djokovic, Serena Williams and Nick Kyrgios. But it was Rafael Nadal who stole the spotlight on the night, thanks to a cheeky gesture he made towards his doubles partner.

The 33-year-old Spanish star was paired with Novak Djokovic for a doubles match against Stefanos Tsitsipas and Alexander Zverev at Melbourne’s Rod Laver Arena, however Nadal proved early on that he wouldn’t be taking orders from his Serbian teammate.

As the talented pair – who were part of ‘Team Williams’ for the nights festivities – took to the court, Nadal said to Djokovic, while pointing with his index finger: “I’ll go here.”

However as he directed Djokovic, who is currently ranked number two in the world, into position he stuck up his middle finger and said: “You’ll go here.” As the audience laughed, Djokovic said: “Please camera can you show Rafa’s finger where he told me that I should go.”

The rude gesture was then broadcast onto the big screens around the arena, causing the crowds of tennis fans to erupt in laughter at the good-natured ribbing. Many people also took to social media to praise the tennis ace’s humour, with one person writing: “Man I love Nadal more and more by the day.”

While another commented: “Nadal giving Djokovic the middle finger has made my day.”

It wasn’t just Nadal’s cheeky sense of humour that won him a legion of fans last night though, as the top tennis star also took to the court with a volunteer firefighter named Deb over the course of the evening.

Deb was invited onto the court to play doubles with her idol and she even got a high five, as well as a hug, from the world number one after making a shot against their opponents Caroline Wozniacki and Alexander Zverev.

The Rally for Relief has so far raised almost $5 million for the bushfire relief effort, while Nadal and Djokovic also donated $250,000 between them to the cause.

Many stars, including Canberra-born Nick Kyrgios and proud Queenslander Ash Barty have also donated to the cause. Kyrgios, who has spoken openly about how the bushfires have affected him in recent weeks, has vowed to donate $200 for every ace he hits throughout all the events he plays this summer.

While Barty promised to donate her prize money from the Brisbane International competition to those affected by the blazes. Speaking earlier this month, she said: “It’s just a really tough time … tennis is a sport, it’s a game that we play, and there are certainly a lot of bigger things going on in Australia right now that we need to take care of.”

She added: “This started two or three months ago, we have to remember that this has been going on for a long time across our country … The worst of it is still out there at the moment.”