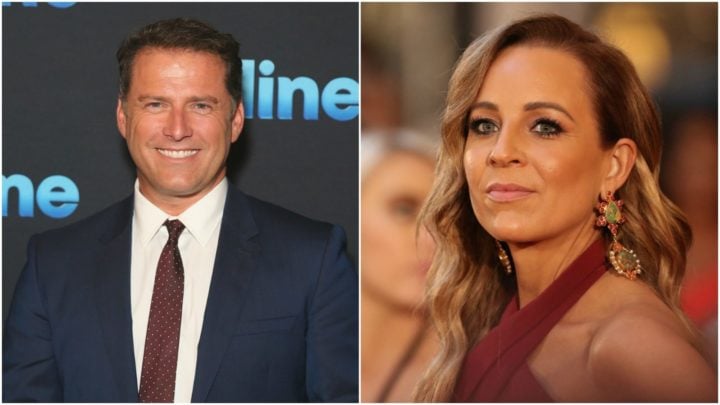 Rumours surfaced this weekend that Carrie Bickmore may be preparing to join rival network Channel Nine as the new face of the Today show. Source: Getty.

Despite her being one of Channel Ten’s most popular presenters, rumours surfaced this weekend that Carrie Bickmore may be preparing to jump ship and join rival network Channel Nine as the new face of the Today show.

In an exclusive story published on Sunday morning, The Daily Telegraph claimed that Nine had set their sights on mum-of-three career joining their talent pool, to take over hosting duties on the struggling breakfast show alongside former host Karl Stefanovic, therefore replacing current hosts Deb Knight and Georgie Gardner.

The news outlet claimed that Nine was “formulating ­secret plans to poach Carrie Bickmore to co-host the Today program”, writing: “High-level talks between Bickmore, the golden girl of Ten’s The Project, and Nine bosses are said to be well under way, with Bickmore believed to be considering an offer worth $1.5 million annually — a deal which would put her among Australia’s highest-paid TV stars.”

However, Nine have now addressed the claims, describing them as “lies”, with Director of News and Current Affairs Darren Wick insisting they have no intentions of trying to poach Bickmore, despite describing her as an ”
outstanding broadcaster”.

“The story published by News Corporation in its Sunday newspapers and online stating as fact that Nine has approached Carrie Bickmore to join the Network is a lie,” Wick said in a statement.

“Nine has not approached, and does not intend to approach, Carrie Bickmore or her representatives about joining Nine as a host of the Today Show, nor in any other role.”

He continued: “Carrie is an outstanding broadcaster and an inspirational person. She’s terrific. But she does not factor in our plans for the future.”

Wick then went on to say that the story published by the Telegraph was “completely made up”, singling out the News Corp reporter who wrote the article and claiming the outlet chose to publish the story “without corroborating sources or facts to support this fantasy”.

He wrapped up the statement by saying: “In fact, the story does not contain any sources on the record. And the anonymous sources it quotes will not stand up to scrutiny under any possible legal examination.”

Meanwhile Bickmore, who also hosts a popular radio show alongside her The Project co-host Tommy Little, has not spoken out about the false reports.

Karl Stefanovic left the show in December last year, after 14 years at the helm, and has since worked on other Nine shows such as This Time Next Year and 60 Minutes.

He said at the time: “For the last 14 years I’ve co-hosted the best show on television. I can’t thank Nine enough for the opportunity. I never in my wildest dreams thought I would be good enough to host this grand show for so long.

“Thanks to our viewers mostly, you are what matters most. It’s been a tough time. Thanks for hanging in there. I look forward to seeing you in another capacity at this great Network soon.”

Do you watch the Today show? Do you think they should bring back Karl, or stick with Deb and Georgie?