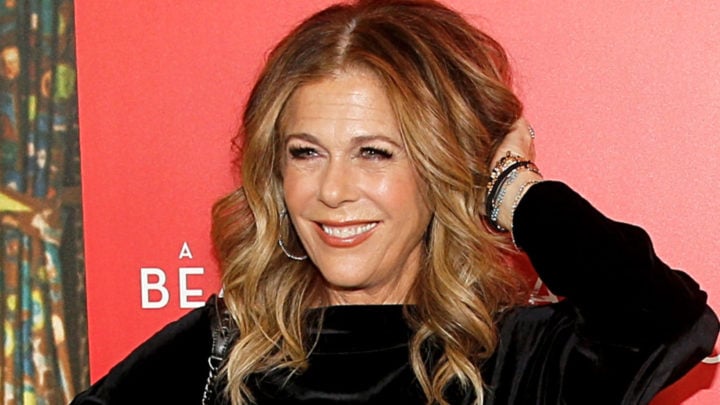 The 63-year-old actress and singer looked sensational at the New York premiere on Sunday. Source: Getty.

Rita Wilson and Tom Hanks looked every inch the Hollywood power couple on Sunday as Rita supported her husband at the premiere of his upcoming movie A Beautiful Day in the Neighborhood [sic], which sees Hanks take on the role of iconic US TV star Mr. Rogers.

Posing for photographs together on the red carpet at New York’s Henry R. Luce Auditorium, Rita beamed as she stood alongside her husband of more than 30 years who plays the leading role in the movie, which is set to be released in Australia in January 2020.

The 63-year-old actress and singer, who has been married to the Green Mile star since 1988, sported a show-stopping black silk dress for the occasion, which featured statement bat-wing sleeves and showed off her figure, with a fitted skirt.

Rita paired the classic frock with a pair of black stiletto shoes are wore her highlighted hair in voluminous curls that hung loosely over her shoulders.

Meanwhile her husband donned a smart dark grey suit for the special night, which he wore with a pale grey shirt and blue patterned tie.

The trailer for the highly anticipated film was released earlier this year and shows Hanks wearing the late Fred Rogers iconic red button-up sweater on the set of his famous children’s show Mr Rogers’ Neighborhood [sic], which aired from 1968 to 2001.

In the two and a half minute clip, Hanks is seen meeting a journalist named Lloyd Vogel – a character based on real-life journalist Tom Junod – who is working on a profile of Rogers. In the clip, Junod – played by Matthew Rhys – says: “This piece will be for an issue about heroes. Do you consider yourself a hero?”

Rogers then replies: “We are trying to give the world positive ways of dealing with their feelings … there are many things you can do. You can play all the lowest keys on the piano at the same time.”

Rogers passed away in 2003 however Junod is still alive. Now aged 61, the former journalist penned an essay about the upcoming movie for The Atlantic titled ‘My friend Mister Rogers’.

“A long time ago, a man of resourceful and relentless kindness saw something in me that I didn’t see in myself,” he wrote. “He trusted me when I thought I was untrustworthy, and took an interest in me that went beyond my initial interest in him. He was the first person I ever wrote about who became my friend, and our friendship endured until he died.”

Have you ever seen Mr Rogers' Neighborhood? What do you think of Rita's outfit?