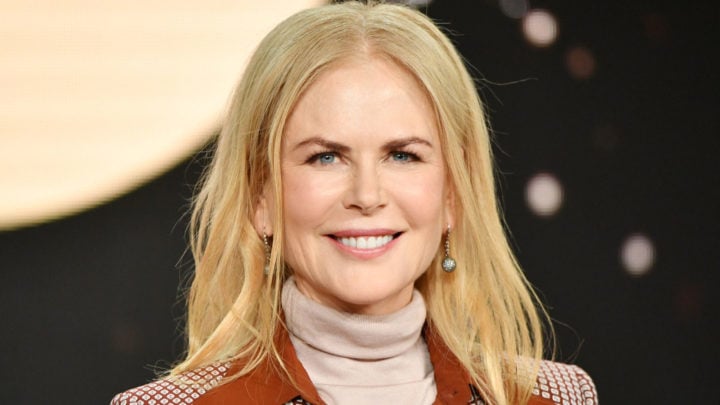 No matter whether she’s wearing a glamorous ball gown, slinky dress or a more casual ensemble, Nicole Kidman never fails to perfect red carpet style and the 52-year-old actress pulled off another striking look on Wednesday as she attended a panel discussion in California.

The Australian beauty stepped out on day nine of the TCA (Television Critics’ Association) Winter Press Tour, alongside her co-star Hugh Grant, to promote her upcoming mini-series The Undoing.

Dressed in a rust coloured shirt with an eye-catching wide collar, the Big Little Lies star seemed to draw her inspiration from the 1970s for her latest awards season look. Nicole layered the shirt over a light-knit polo neck jumper and completed the ensemble with a rust and white patterned jacket, which cinched in and fastened at the waist.

The Moulin Rouge star gave her retro look a modern twist, however, as she teamed the neutral shades with a contrasting pair of bubblegum pink trousers and a pair of flat Mary Jane shoes.

Nicole took part in a Q&A session alongside Grant, who plays her husband in the highly anticipated HBO series, as well as director Susanne Beir, co-star Noma Dumezweni and writer David E Kelley.

The Undoing is based on 2014 novel ‘You Should Have Known’ by Jean Hanff Korelitz and will hit the small screen in May. The six-episode series will follow successful couple Grace and Jonathan Fraser (played by Nicole and Hugh) whose lives are changed forever following a violent death, which sparks a chain of events.

A tense synopsis published by HBO reads: “Overnight a chasm opens in their lives: a violent death and a chain of terrible revelations. Left behind in the wake of a spreading and very public disaster and horrified by the ways in which she has failed to heed her own advice, Grace must dismantle one life and create another for her child (Noah Jupe) and her family.”

Nicole’s dressed down appearance comes just days after she owned the red carpet at the 25th annual Critics’ Choice Awards. True to form, the mother-of-four looked incredible for the prestigious awards bash as she posed for photographs ahead of the ceremony.

She stole the show in an incredible gothic gown which featured a black velvet strapless bodice and hugged the actress’ petite frame perfectly. While the gown’s full skirt made a dramatic statement thanks to the intricate beading and pink ombre underskirt which helped to soften the all-black outfit.

The dress also featured a thick black leather-look band around the centre, and Nicole opted to let the gown take centre stage as she opted not to wear any jewellery for the outing, instead allowing her blonde hair to flow over her shoulder in soft curls.

The Sydney native was nominated for two awards at Sunday night’s ceremony; in the ‘Best acting ensemble’ category for the movie Bombshell; and in the ‘Best actress in a drama series’ category for her role as Celeste in HBO series Big Little Lies. However she was sadly pipped to the post on both counts by The Irishman and Regina King, for Watchmen, respectively.

Are you a fan of Nicole Kidman? Do you remember these trends from the 1970s?