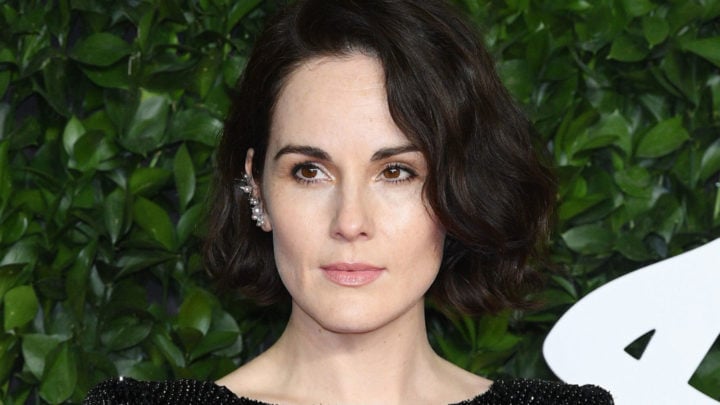 Michelle Dockery, best known for her role as Lady Mary in ITV's Downton Abbey, stepped out for the VIP event in London. Source: Getty.

Michelle Dockery became a household name thanks to her role as Lady Mary Talbot in the hit ITV series Downton Abbey, and it seems the British actress shares a love of fashion with her on screen counterpart as she made a dazzling appearance at a star-studded event in London on Monday evening.

The 37-year-old star stepped out at the British Fashion Awards at the Royal Albert Hall last night and she commanded attention on the red carpet thanks to her sensational floor-length black gown, which shimmered in the bright lights as she posed for photographs.

Michelle’s gown appeared to have been fashioned from a mock chainmail fabric and featured bold shoulder pads which flattered the actress’ frame. The Dagenham-born star let the stunning dress do the talking as she kept her accessories simple for the outing.

She paired the gown, which clung to her curves before falling straight to the floor, with a pair of black suede stilettos and wore a striking silver ear cuff in lieu of earrings. Michelle wore her cropped brown hair in an effortless wavy style and kept her make-up understated with a pop of colour on her lips and a slick of black eyeliner.

Mary was joined at the event by her Downton Abbey co-star Laura Carmichael, who played Lady Mary’s younger sister Lady Edith Crawley. The 33-year-old British actress had opted for a similar colour palette to her on screen sister, wearing a sparkling black mini dress for the celebrity event.

Laura, who is dating fellow Downton alumni Michael Fox – aka footman Andy Parker – looked incredible in the black velvet bandeau dress which featured two striking gold fan designs on the front. She completed the glamorous ensemble with a simple pair of black stilettos and a pair of statement earrings.

The event was Laura’s second outing in just two days as she stepped out with her partner Michael, 30, whom she met whilst filming Downton, on Sunday for the annual One Night Only fundraising dinner held at The Ivy restaurant in aid of charity Acting for Others.

The couple beamed as they participated in the annual event, which sees stars of the small and silver screen don aprons and join the waiting staff of the prestigious London restaurant, greeting guests, passing out drinks and serving a three-course dinner. Michael posed alongside his girlfriend in his waiter’s uniform, resembling his Downton alter ego who was rarely seen out of his footman’s attire.

Before swapping into an apron herself, Laura cut a sophisticated figure in a checked smock dress which cinched the 33-year-old actress in at the waist with a simple tie belt. The loose-fitting dress was perfect for winter with its subtle gold and black check, which she paired with a pair of opaque black stockings.

Laura also posed alongside her former co-star Dame Penelope Wilton, who was seated on the prestigious Knights and Dames table alongside McKellen and Thompson.

Penelope looked far more modern than her on screen counterpart Mrs Crawley in a vibrant teal smock shirt, which featured a striking pin-stripe design and asymmetrical collar. While Laura swapped into her waiter’s uniform, swapping her tartan frock for a crisp white shirt, teal tie and apron.

What do you think of Michelle's look? Are you a fan of Downton Abbey?