Kerri-Anne, Angela Bishop and Ita Buttrose steal the show on glam night out 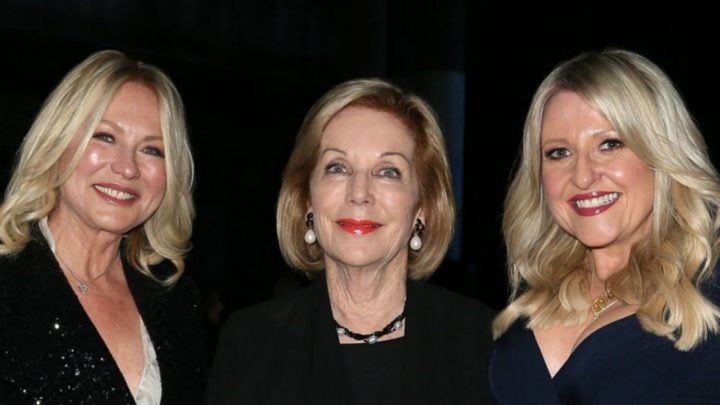 Kerri-Anne Kennerley, Ita Buttrose and Angela Bishop were a fashionable trio this week as they stepped out together for a Mercedes-Benz Fashion Week event in Sydney.

The talented television presenters looked sensational for the Carla Zampatti show as they stepped out in stylish, yet vastly different, outfits and posed for photos at the multi-arts centre Carriageworks.

The blonde bombshells showed off their individuality with Kerri-Anne going for a casual yet classy number in black pants, an off-white silk blouse and sparkly black jacket. Standing tall in black heeled boots, the 65-year-old was all smiles for the cameras, with her beautiful locks styled in soft waves over her shoulders.

Black was also the colour of choice for Ita, 77, as she kept things simple and sophisticated for the event, donning black pants, a black blouse and a long black jacket. She added a pop of colour with a bold red lip and accessorised her look with a pair of pretty dangly, pearl earrings.

Meanwhile, Angela changed things up in a busty, tight-fitted dress which complimented her figure beautifully. The 51-year-old dressed to impress in the navy mini-dress and stood tall in nude stiletto heels. She also brightened up her look with a dark pink lip, bright red nail polish and a pretty turquoise ring.

The three stepped out with a flurry of other Aussie stars and personalities at the fashion event to view the wide range of outfits created by some of the country’s best fashion designers.

Running for a total of six days, the annual showcase gives designers the opportunity to connect with potential buyers, the press and consumers, giving them ideas for future trends.

Angela’s appearance at the event follows her recent celebration of 30 years on television. The Studio 10 host was brought to tears last week as her mother Bronwyn Bishop delivered a heartfelt message congratulating her on her career milestone.

The 51-year-old struggled to contain her emotions as she listened to the lengthy video message, which was shared during a special episode of the program which primarily focused on Angela’s time with Channel 10. The TV host first graced Aussie screens in 1989 and has maintained a strong television presence ever since.

While Bronwyn could not be there in person to congratulate her daughter, she made sure to let the presenter know just how proud she is of what the host has accomplished.

"There's just not enough time for me to tell you how proud I am of @AngelaBishop, but here it goes…"

“Unfortunately, there’s just not enough time for me to tell you how proud I am of Angela, but here goes,” Bronwyn began as an amazed Angela sat in the studio.

Over the years, Bronwyn said she witnessed her daughter’s love of journalism grow, explaining how passionate the reporter was and still is about bringing entertainment news to the public.

“I watched her commitment grow through her initial current affairs reporting to establishing her entertainment reporter credentials,” she said. “Demonstrating her belief that the entertainment round is as important and legitimate as any other round such as court, politics, health or sport. Entertainment is human interaction and she captures it.”

The caring mum added: “Her amazing work ethic is obvious and she is totally reliable.”

Are you a fan of the three television presenters? Which look do you like the most?