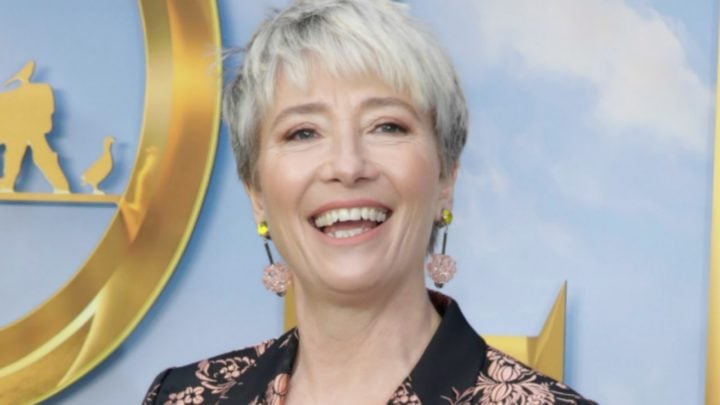 Emma Thompson stepped out on Saturday evening for the premiere for her new film Dolittle. Source: Getty.

When it comes to red carpet fashion there is no denying that Emma Thompson is one to make a statement, and the actress knocked it out of the park once again last night as she stepped out in London.

The 60-year-old stepped out on Saturday evening for the premiere for her new film Dolittle alongside her co-star Robert Downey Jr.

Emma wowed on the green carpet as she arrived at the event, smiling broadly for the cameras and striking a confident pose in the dazzling ensemble which featured an oriental-inspired coat with a rose-gold pattern over it. She paired the outfit with black slacks and loafers.

The Love Actually star kept her accessories simple, allowing the chic coat to do the talking, adding a simple pair of earrings. She wore her hair in a cropped style and opted for minimal makeup.

Emma was last snapped in London last month showing off her cropped platinum locks that are tinged with grey tones at the temples.

The star debuted her new colour during the 2018 premiere of her film, The Children Act – trading in her honey blonde hair for arctic white – and she’s been rocking it ever since!

Looking effortlessly chic, the talented actress showed off her edgy style in an oversized black blazer and trousers. Emma opted for stylish trainers in favour of towering heels on the night, adding some glitz with a pair of diamond drop earrings.

She wore her locks slicked back and kept her makeup to a minimum, which included a soft eyeshadow and pink lipgloss.

Emma plays Polynesia, a wise and headstrong macaw and Dolittle’s (played by Robert) most trusted advisor in the film.

Are you a fan of Emma Thompson? Do you like her style?