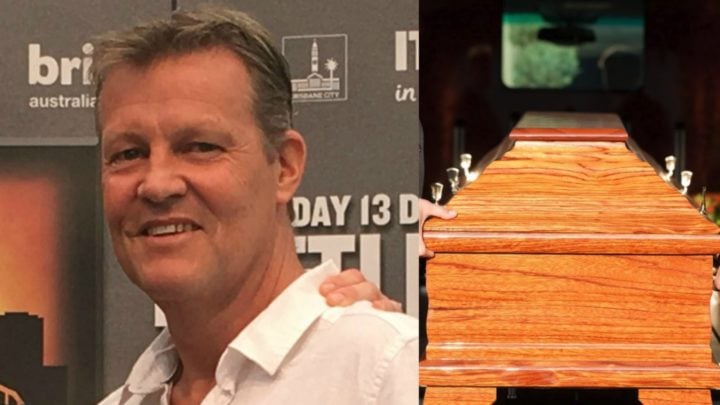 A professional funeral crasher has revealed he’s been inundated with jaw-dropping requests from new clients since first opening up on his quirky job in an interview with Starts at 60 – with one man now asking to be placed in a very unusual position in his coffin, while another woman made a seriously brutal plea regarding her will.

Gold Coast grandad Bill Edgar, 50, is a private investigator by day but branched out his skills a few years ago after an unusual request from one of his clients – a 79-year-old man who had been diagnosed with terminal cancer. The man asked him to interrupt his funeral when his best friend began to deliver the eulogy, all to tell him – in front of their family and friends – that he knew he was trying to sleep with his wife.

Finding he was a natural at it, Bill has developed his unusual business ever since – with requests including everything from telling a bikie’s family he was secretly gay, to clearing a dying man’s secret ‘sex room’ out so his family didn’t have to. Now, after sharing his story, he’s told Starts at 60 in a new interview: “Since the news broke thousands of people from across the globe have requested their funeral be crashed by The Coffin Confessor.”

While some of his new jobs are fairly simple, others are extremely controversial – with one man even asking Bill to deliver one final blow to the family members and friends who he didn’t see eye to eye with.

“One gentleman has requested The Coffin Confessor makes sure he’s placed in his coffin naked and laying on his stomach so as those who come to view his body can kiss his arse!” he admitted.

“Many others have requested items be placed in their coffins, with some also wanting their body placed in a certain position (most wanting their own pillow). However the number one request is for The Coffin Confessor to tell those left behind how much they were loved, while those that they ‘loved to hate’ to f**k off!”

Meanwhile, a particularly memorable job recently came when Bill was contacted by a woman who was forced to spend her final days in hospital after becoming very ill. While she asked him to help her clear away some things in her home – it was her request for her will that really surprised him.

“Recently [I] was engaged to remove a number of items from the home of a woman who was taken to hospital and told she would not be returning due to her health… The items included sex toys, money and heirlooms,” he revealed. “But it was her Last Will and Testament that she wanted most and, when retrieved, she demanded it be destroyed so her family would have to fight over her estate.

“Asked why [she made this request], she said, ‘Death brings out the worst in people, so let the worst suffer’.”

Bill previously explained that word spread about his work when someone at his first funeral interruption told their aunt about what happened and she got in touch, wanting the same thing. From there, someone at her funeral then got in touch and it continued on.

The father-of-two explained he’s usually asked to interrupt the eulogy, but he has even stopped the priest on two occasions. While there is no set payment for his service, he explained it varies from case to case and his first one totalled $10,000. Meanwhile, one woman who only had $1,500 to her name needed help in her final days, and he was able to carry out her wish for $500. A lot of the money Bill earns goes towards travel expenses, as he explained he’s travelled right round Australia for jobs in NSW, Melbourne, Cairns and more.

“The biggest problem I’ve found, and I’ve really come to terms with it now, is every funeral respects the people that are living and left behind, they don’t actually respect the dead,” he insisted. “They’re talking about how great they are. You can go to a funeral and sit there and listen to all the BS you can think of, and you’re like, ‘No that’s not them’, but we never stand up and say, ‘Hey, this is what he or she was like, they were great or bad’.”

While he has covered all kinds of confessions and final requests, Bill explained he draws the line with suicide, or with anyone who asks him to assist in a death in any way. He also has strict rules when it comes to someone confessing a crime, and while he’s previously had clients admit to smaller misdemeanour crimes, he tells them from the start that it’s his obligation to report them if they admit anything worse.

Would you consider hiring a funeral crasher? Do you have any secrets you plan to take to the grave?