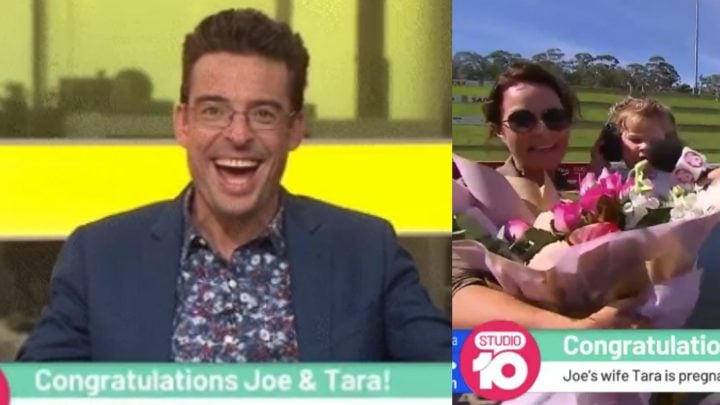 Studio 10 star Joe Hildebrand has revealed he’s expecting his third baby with his wife Tara in an incredible announcement online, before pulling off a dramatic gender reveal on the show itself.

The 42-year-old TV star wrote an exclusive first-person piece for Kidspot just hours before announcing his news on the Channel 10 show, sharing his hilarious thoughts on the news he’d be having another baby girl.

Describing the endorphin that’s released in many women after birth, Hildebrand began by saying it “makes her temporarily forget that she has just pushed an object the size of a papaya through a hole the size of the change pocket on a pair of Levi jeans”.

He went on to say life starts to settle down over a year in, as the baby begins walking and talking, but insisted that this time is actually “God’s Great Trick”.

“The mother is so deranged by constant squealing and sleep deprivation that she forgets how horrendous the birth was and how hideous the first 12 months have been that she eventually gives in to the father’s constant insistence that they have another, even though he’s only really saying it because he hasn’t had a shag for a year,” he wrote.

From there, he went on to say the decision to have a third baby is simply man trying to “achieve the supernatural”.

For he and his wife Tara, he said that moment came when they enjoyed a brief (and rare) moment where they sat watching their kids happily playing, while they watched and laughed together. But, after deciding to try for a third baby and subsequently falling pregnant, he joked: “It only goes to prove, as I have always said, that laughter never leads to anything good.”

“And so yes, we are having a third child and it is going to be another girl,” he concluded. “This fills me with both great relief and great fear. The relief is that I will not be head-butted in the nuts for the first ten years of her life and the fear is that for the second ten I will have absolutely no idea what she is talking about.”

It wouldn't be a baby announcement without a gender reveal! @Joe_Hildebrand & Tara are having a… 🤭👶 #Studio10 pic.twitter.com/NmL7VQpWjP

After the piece went live online, the Studio 10 panel took time to announce the news themselves on the program with Hildebrand stopping to enjoy huge applause from the audience.

“That is right, I’m having a baby girl!” he began. “We got the results back last night and Tara’s told me it’s mine! I’m very, very excited.”

The show then went on to set up an official gender reveal, with Hildebrand’s wife and two kids stood by a race track as a ute revved and screeched its tyres to reveal pink smoke.

Can you remember finding out you were expecting another baby? Can you relate to Joe’s words?