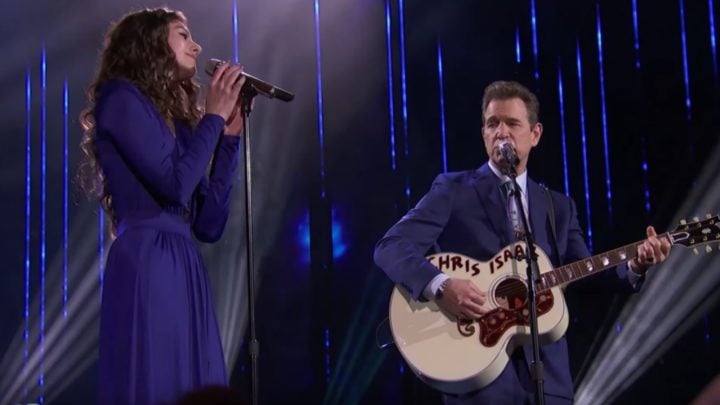 He’s one of the world’s most loved entertainers and Chris Isaak inspired a whole new generation when he performed on an episode of American Idol earlier this week.

The 62-year-old – best known for songs including ‘Baby Did a Bad Bad Thing’, ‘Blue Hotel’ and ‘Only the Lonely’ – surprised 19-year-old contestant Evelyn Cormier by joining her onstage for a truly special performance. Evelyn had originally auditioned for American Idol with Chris’ ‘90s hit ‘Wicked Game’ and the aspiring singer got the chance to perform the track alongside the iconic musician in the Top 20 All-Star Duets round of the competition.

“He’s amazing! He’s my dream duet,” Evelyn said of Chris before the performance.

Chris began the song by strumming his guitar and singing the soulful lyrics, much to the delight of the live studio audience and judges Lionel Richie, Luke Bryan and Katy Perry. Meanwhile, Evelyn’s parents looked on in awe from the audience when their daughter began singing, easily matching Chris’ talent.

At one point the former X Factor Australia judge even stopped singing so the audience could truly take in Evelyn’s incredible vocals, with Lionel in particular seen clapping and cheering from the audience.

Viewers at home were quick to praise both Evelyn and Chris on the performance.

One person on YouTube wrote: “Her voice is hauntingly beautiful, a very unique voice! Great duet! Their voices complemented each other.”

A third added: “The nostalgia of this song brought tears to my eyes, my god that man’s voice hasn’t aged a day.”

Chris also took to Twitter to praise the budding musician. He wrote: “@EvelynCormier is talented beyond her years! It was great working with her on @AmericanIdol. I’ve been a fan since day 1 (singing Wicked Game for her audition only influenced me a little…).”

.@EvelynCormier is talented beyond her years! It was great working with her on @AmericanIdol. I’ve been a fan since day 1 (singing Wicked Game for her audition only influenced me a little…) See us perform on Monday’s ep! PS: Tell your mom that blue was a good choice! #IdolDuets pic.twitter.com/64xRW5FPE4

The performance paid off, with Evelyn progressing through to the Top 14 and live shows.

“Congratulations from myself and Rodney on a great performance, and for making it through to the live shows, @evelyncormier,” Chris later wrote.

Congratulations from myself and Rodney on a great performance, and for making it through to the live shows, @evelyncormier! #AStarIsBorn #IdolDuets @AmericanIdol pic.twitter.com/TnMIozzK8U

Evelyn also shared the special advice Chris gave her before the pair took to the stage.

“’Remember…this is YOUR song, this is YOUR stage…’ ~words spoken to me by Chris Isaak before we performed HIS song on @americanidol All Star Duets!,” Evelyn wrote on Facebook. “He meant it too! Thank you, Chris, for an evening I will never forget!”

Evelyn, originally from Claremont in New Hampshire, inspired the judges with her audition of ‘Wicked Game’ earlier in the series. Judge Katy said Evelyn’s voice was one of the best she’d heard in her entire life.

She is now one of 14 singers left in the competition fighting it out for the chance to become the next American Idol.

What did you think of the performance? Are you a fan of Chris Isaak?