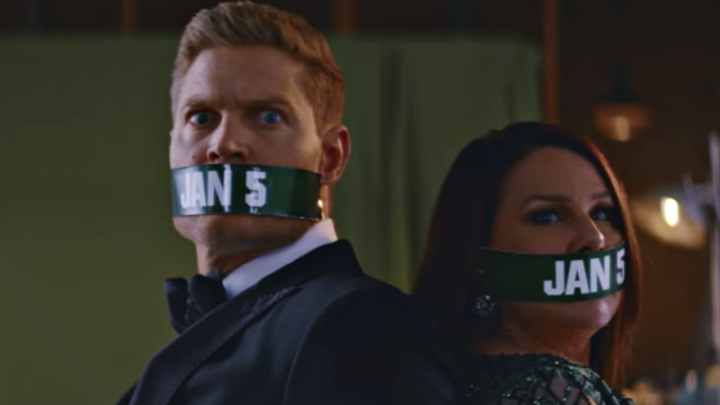 The first trailer for the upcoming series of I'm A Celebrity ... Get Me Out Of Here! was released on Tuesday. Source: Facebook/I'm A Celebrity.

There are still two months to go until I’m A Celebrity … Get Me Out Of Here! returns to Channel Ten, but the identity of the first contestant has already been revealed. A new trailed for the show was released on Tuesday, revealing that Miguel Maestre will be heading to Africa next year.

The Living Room star is the only name to have been confirmed so far, however rumours are already circulating about who might join the celebrity chef on the gruelling reality TV show. One name being thrown around is Schapelle Corby, following the release of her updated memoir ‘My Story’.

Maestre’s participation in the show was unveiled in a new trailer, which also featured returning hosts Dr Chris Brown – aka the Bondi Vet – and Julia Morris. The two-minute trailer was released on Tuesday afternoon and features Maestre as an evil villain who has captured Brown and Morris.

“The famous vet!” the Channel 10 star says. “And his funny companion … I hear that you two kidnapped a new group of celebrities and will be exposing them to all sorts of cruelty. I need to know who is going in on this January 5!”

Comedian Morris replies: “There’s nothing you can do to make us talk.” Before Brown adds: “I can give you one name … Yours!”

Fans were delighted by the announcement, with many sharing their excitement about the upcoming series on social media. One person wrote: “I’ve always wanted to see Miguel in the jungle. Sign me up I’ll be watching.”

Another commented: “Miguel is such a brilliant pick to go into the jungle.” While a third said: “Omg love Miguel he’s so funny on the living room should be great Miguel to win [sic].”

The trailer also hints at who the other contestants may be, with Morris alluding that “an Aussie comedian, an AFL legend and a TV megastar” will also take part in series six of the popular show, as the celebrities battle it out to win $100,000 in prize money for a charity of their choice.

Richard Reid was crowned King of the Jungle earlier this year after winning the 2019 series of the show, beating out the likes of Sam Dastyari, current Bachelorette Angie Kent and retired AFL star Shane Crawford.

The Channel Nine entertainment reporter, who previously starred on the Today show, only found himself in the bottom three twice during the five weeks he spent on the show. Former Gogglebox star Yvie Jones finished close behind him in second place, while former Hawks player Crawford took home third place.

Do you watch I'm A Celebrity ... Get Me Out Of Here!? Do you think Miguel will be a good contestant?