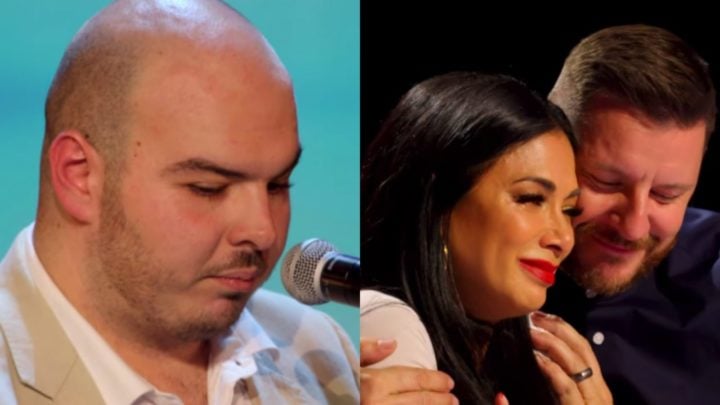 The contestant performed a moving audition that brought the judges and audience to tears. Source: Facebook - Channel 7

TV show Australia’s Got Talent is set to start in the coming weeks and an emotional preview video has now revealed the moment the judges were brought to tears during auditions by a blind singer and pianist, who was awarded the golden buzzer for his inspirational performance.

The contestant appears on the new season of Seven’s AGT, which is coming to Sundays soon, performing a moving audition that leaves the judges and audience to tears.

In a new preview clip, released by Seven, the singer – who is joined onstage by his mum – impresses the likes of Manu Feildel with his emotional performance, which earns him a standing ovation as well as the golden buzzer from judge Lucy Durack. While Seven are keeping the song itself a closely guarded secret, it’s clear it has a huge effect on everyone in the room.

Meanwhile, a teary Nicole Scherzinger adds: “I’m crying my face off right now… Australia’s got talent you guys. You’re the reason why I flew here.”

“That was magic, you sing with such honesty and heart… the only thing left really,” Lucy adds, before pushing down on the golden buzzer.

Meanwhile, prior to his audition, Paul tell viewers at home that music has given him the “confidence and the freedom” to truly be himself.

“I want Australia to see what I can do and I just think it’s the right time,” he says in the preview clip.

It’s not the first time a talent show audition has made headlines. Earlier this week, a 65-year-old Vietnam war veteran, who started going blind about four years ago due to glaucoma, surprised judges with an incredible performance on America’s Got Talent.

Prior to his audition, Robert Finley from Winnsboro, Louisiana, told viewers at home that despite being almost “totally blind”, he’s finally living his “childhood dream”.

“Four years ago I realised I was gradually losing my sight. Now I’m almost totally blind,” he revealed. “But a bad thing sometimes brings out the best thing. I began to play music again. It made me reach inside and find myself.

Now Robert’s audition has gone viral thanks to his lively rendition of his original song ‘Get It While You Can’ that knocked the socks off the judges and even earned cheers from the audience.

All four judges gave Robert a standing ovation, with American dancer Julianne Hough saying: “You might not be able to see us, but I hope you can feel us.”

Will you be watching Channel 7’s Australia’s Got Talent?