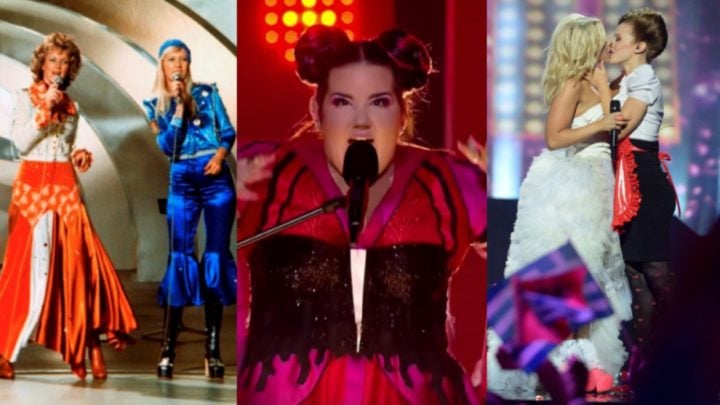 It’s the most energetic, colourful and often bizarre music competition in the world, bringing together stunning vocals and wacky performances from across the globe.

From last year’s winner taking the top spot with a chicken dance to star performances from the likes of ABBA and Celine Dion and even passionate on-stage kisses, there have been some hilarious, emotional and downright shocking TV moments on the Eurovision Song Contest through the years.

And now, as the world awaits the announcement of the 2019 winner, here’s a look back at some of the contest’s most memorable moments:

It seems the judges were in the mood for something a little more wacky last year – and the contestants certainly delivered.

In the end, Israel’s Netta won the night with a song named ‘TOY’ and choreography that resembled the chicken dance – clucking included.

Long before she was selling out arenas around the world and entertaining hundreds of concert-goers each night in Las Vegas, Celine Dion actually represented Switzerland in the 1988 Eurovision Song Contest.

Even though she was born in Canada, her powerhouse vocals of French song ‘Ne Partez Pas Sans Moi’ proved a hit with voters and viewers watching all across the globe as she went on to win the show.

A year before the chicken dance won the crown the show almost came to a dramatic halt when a stage invader wrapped in an Australian flag ran on during the 2017 contest, while the previous year’s winner Jamala was performing.

He managed to flash his bum on camera, before security leapt on stage and removed him. The invader was later identified as a Ukrainian prankster.

A puppet takes to the stage

In 2008 things took a rather comical turn when a puppet was chosen to represent Ireland at the song contest. Dustin the Turkey became somewhat of a cultural phenomenon and was the first puppet to ever represent the country.

Dustin was a fan favourite, although he failed to secure enough votes to progress past the semi-final round. He remains one of the competition’s most memorable performances thanks to his Riverdance references and thick Irish accent.

ABBA are propelled to stardom

Going back a few years, many forget iconic band ABBA have Eurovision to thank for their successful music career. The Swedish group stormed the stage with ‘Waterloo’, which went on to become one of their biggest hits. It also made them one of the most famous bands in the world.

It was the first time Sweden ever won the competition, but wasn’t the first time ABBA tried their hand at a music contest. The previous year they entered the Melodifestivalen competition with ‘Ring Ring’ in an attempt to be sent to represent their country in Eurovision.

Of course, she went on to be better known for her starring role in Grease alongside John Travolta in 1978, but her stunning vocals in the competition are memorable in their own right.

Many performers have been known to make a political statement at the Eurovision Song Contest and 2013 was no different, as Finland’s performer Krista took the opportunity to kiss her girlfriend and back-up dancer on camera in what was later claimed to be a protest against the country banning gay marriage.

One of the biggest surprises of Eurovision in recent times was bearded lady Conchita Wurst. Representing Austria, audiences didn’t quite know what to make of Conchita, but her powerhouse vocals in ‘Rise Like a Phoenix’ ended up winning her the competition.

In another major political statement, it has been widely claimed that Israel’s contestant Ilanit wore a bulletproof vest on stage in 1973 – although it wasn’t visible under her outfit and wasn’t confirmed at the time.

It came after 11 members of the Israel Olympic team were taken hostage and later murdered by extremist group Black September during the 1972 Summer Olympics in Munich. At the time, presenter Terry Wogan reportedly warned the crowd to remain seated or they could risk being shot by tighter security.

Another colourful performance many remember is that of Bucks Fizz. The group from England brought some much-needed fun to the 1981 contest and actually won the competition with ‘Making Up Your Mind’.

Viewers were equally shocked and captivated when female members of the group had their skirts ripped off mid-performance, only to reveal even shorter skirts underneath. That became a cultural phenomenon, while the song itself sold four million copies worldwide.

While the competition is usually full of young twenty-somethings, a group of Russian grannies waved the over-60s flag high in 2012. Six ladies in the ethno-pop band Buranovskiye Babushki took to the stage in Baku with a truly memorable performance.

The women came second with their hit ‘Party For Everybody’. Controversially, the band actually consisted of eight women, but two weren’t allowed to take to the stage due to contest rules.

Do you enjoy the Eurovision contest? What has been your favourite performance through the years?