‘This one’s for you!’ Taron Egerton joins Elton John on stage for ‘magical’ duet 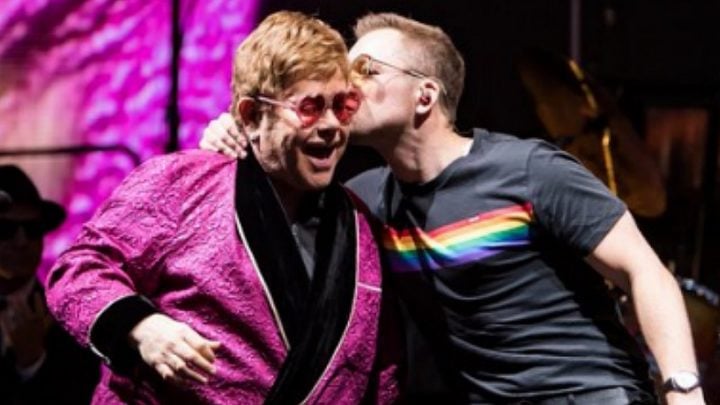 Elton John brought Taron Egerton onto the stage during his tour to sing 'You Song' together. Source: Twitter/ Elton John

Elton John brought fans to tears this week when he invited actor Taron Egerton onto the stage during his farewell tour to perform a beautiful and moving duet of one of hit most-loved hits.

The British star, who plays superstar Elton in the newly released film Rocketman, took to the stage alongside the famous singer in Brighton, England to share his incredible vocals with thousands in what has been described as one of  the “most magical concerts”.

In a surprise for fans the two performed the famous tune ‘Your Song’ with Taron taking prime position in the centre of the stage, while Elton sat comfortably at the piano guiding the actor along.

Footage of the incredible duet has been shared online by surprised and delighted fans, who were overwhelmed with the opportunity to hear them sing together, flooded the pair with praise.

They are amazing. We need more Taron and Elton singing together. #RocketmanMovie
pic.twitter.com/Lmi6nAMt1j

“Elton and Taron singing together makes me cry they’re so beautiful,” one person wrote on Twitter.

“Taron Egerton and Elton John sang together again and their voices sounded perfect. It was wonderful to see them perform together,” another added.

While a third said: “The whole evening was one of the most magical concerts I’ve ever been to in over 20 years of gig going. Thank you!”

Elton also took to social media to express his admiration of the young actor who sings all of the star’s songs himself throughout the hit movie.

In a post shared on Twitter, alongside a photo of Taron planting a kiss on his cheek, Elton wrote: “What a show in Brighton just now at @SussexCCC. @TaronEgerton, thank you for joining me on stage tonight.

“We’ve shared so many moments during the filming and release of #Rocketman and singing ‘Your Song’ with you this evening is another I’ll always cherish. Elton xx.”

What a show in Brighton just now at @SussexCCC ❤️ @TaronEgerton, thank you for joining me onstage tonight. We've shared so many moments during the filming and release of #Rocketman and singing 'Your Song' with you this evening is another I'll always cherish.

Taron shared the gorgeous snap too, writing: “Well… that was fun!”

It was an especially cherished moment for the actor who according to Yahoo Entertainment performed ‘Your Song’ as his audition piece to get into the Royal Academy of Dramatic Art when he was just 19-years-old.

The surprise performance comes after Elton praised Taron for his incredible recreation of ‘Rocket Man’ in a video filmed in the recording studio prior to the movie’s release.

Seeing the full length video, Elton himself admitted he was “astonished” to see the result of all of Taron’s hard work.

“It was so important for the music to be sung by Taron. I wanted his interpretation of me, through the music. I’ve been astonished with the results,” he revealed on Twitter.

The video begins slowly, just as the original did, with Taron managing to capture Elton’s smooth tone throughout. From there, he flawlessly shows off his vocal range as he hits every high note perfectly.

Rocketman follows Elton’s life and career as he prepares to release his 1972 breakthrough album Honky Chateau, from the highs to the lows, and Taron, 29, appears to completely transform on screen – looking almost unrecognisable in full costume.

The video shows him in a variety of costumes, dancing on stage and showing off some of his signature moves in front of the crowd.

Are you a fan of Elton John and Taron Egerton? Have you seen the new Rocketman movie?