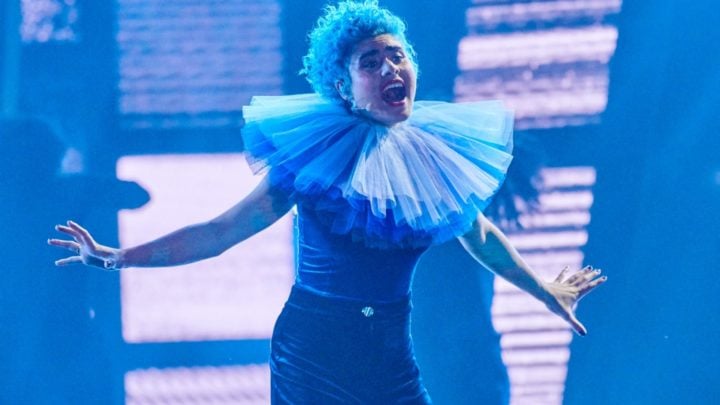 Montaigne will head to the Netherlands in May to represent Australia at the annual Eurovision song contest. Source: Supplied.

She stunned Aussies on Saturday night with an incredible performance, and now it’s been confirmed Montaigne will head to the Netherlands in May to represent Australia at the annual Eurovision song contest.

The singer, whose real name is Jessica Cerro, was declared the winner of SBS’ second-ever Australia Decides competition on Saturday evening.

Fans were given the chance to vote for their favourite song and artist — with Montaigne beating nine other contenders including global superstar Vanessa Amorosi, former Australian Idol winner Casey Donovan, and Australia’s Got Talent winner Jack Vidgen with her original song, ‘Don’t Break Me’.

“This is wild! I started out just grateful to be a part of Eurovision but this is fricken insane!” the singer said in a statement. “Thank you to everyone who gave me their vote, I’m so excited to go to Rotterdam and give it a red hot go!”

Montaigne also took to Facebook to share her excitement, writing: “THE MOST INSANE NIGHT EVER — I’M GOING TO EUROVISION — LIFE IS CRAZY — THANK YOU FOR SUPPORTING ME.”

Montaigne is perhaps best known for her 2016 hits ‘Because I Love You’ and ‘Love Might Be Found’.

People were quick to congratulate Montaigne on her stellar performance, with one writing: “Yes. Congratulations! What a great song! Love all of your stuff.”

While another added: “Great work, we were in the crowd and captivated by your performance. Good luck in Rotterdam!” And a third wrote: “You are such a champion. You nailed it, your voice was spectacular & you served up a fantastic performance! Well done, can’t wait to cheer you on.”

It comes after Kate Miller-Heidke finished in ninth place last year, being pipped to the post by the likes of the Netherlands who won the night with an incredible 492 points.

Kate’s performance rightly earned her a spot in the top 10 though, having secured 154 points from the professional jury vote and a further 131 from the public vote, giving her a grand total of 185.

Miller-Heidke’s performance was revered by the audience in Tel Aviv as she belted out her incredible track ‘Zero Gravity’, appearing to float around the stage as she moved on top of a bendy stilt pole, which was hidden from view by stage smoke.

Will you be watching Eurovision?