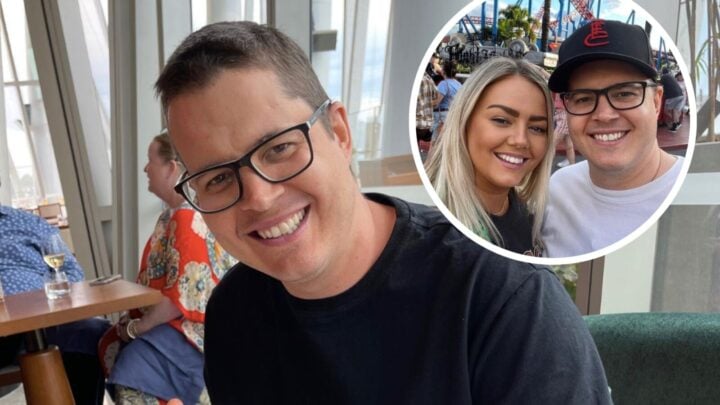 Ruffo and Sims are all smiles as they spend the day at Movie World on the Gold Coast. Source: Instagram @johnny_ruffo | @tahneesims

Nothing beats spending a gorgeous sunny day at a theme park, and former Home and Away star Johnny Ruffo clearly had the same idea as he and his girlfriend took a trip to the Gold Coast for an exciting day at Movie World.

Ruffo’s longtime girlfriend, Tahnee Sims, took to Instagram to share a sweet snap of herself and Ruffo grinning at the camera as they pose in front of the park’s famous Superman Escape rollercoaster, captioning the photo with a collection of emojis.

Fans of the 34-year-old actor were absolutely delighted to see Ruffo and Sims enjoying their day out. The last update the actor shared on social media was of him undergoing another round of chemotherapy.

Fellow Home and Away star Lynne McGranger commented “beautiful pic” while one of Ruffo’s fans remarked that they were glad to see the couple spending time together writing, “you both look so happy and you are looking well Johnny”.

Their trip to Queensland is no doubt a welcomed distraction for the couple who are going through yet another tough time after learning that Ruffo’s brain cancer diagnosis is terminal.

Ruffo has been battling the disease for five years, having first been diagnosed in 2017 when what he believed to be a migraine turned out to be a very serious brain tumour.

Since his shock diagnosis, Sims has been a constant pillar of support for her boyfriend, with Ruffo confessing in interviews he believes his girlfriend’s insistence that he go get a check-up at the hospital for his recurring migraines saved his life.

Though Ruffo feels like he’s “winning” his cancer battle, outliving the three-year life expectancy of brain cancer, he has admitted he felt robbed by his diagnosis.

“It just felt like everything came crashing down,” he told Nova radio hosts Fitzy and Wippa back in early September.

“I’m angry about it; there’s so many emotions that I feel about it. I’m angry. I’m sad. There’s so many feelings that are just balled up. Sometimes you don’t know what to feel. I’m sad.”

Despite his trials and tribulations, Ruffo said he still enjoys days of happiness and has many things to look forward to, sharing that he is anticipating the arrival of his older brother Michael who he had not seen in three years.

Speaking to 7News, Ruffo shared that he and his older brother are “thick as thieves” and it had been difficult not seeing him.

Besides Sims, Michael is Ruffo’s “closest” companion, admitting that navigating the Covid-19 pandemic and his second bout with cancer without Michael’s physical presence was difficult.

Since making the announcement that his cancer is terminal, earlier in August, Ruffo has already frozen his sperm as he thought it was a necessary step to take in case he became infertile while undergoing treatment for his brain cancer.

He also regularly updates his fans via social media on his treatments and any milestones he reaches as he continues his fight with the disease.