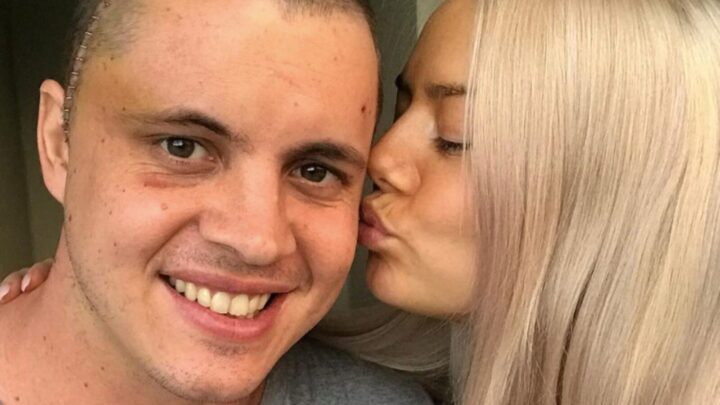 After undergoing brain surgery and numerous chemotherapy sessions, former Home and Away star Johnny Ruffo has reached an important milestone in his battle with brain cancer.

The 34-year-old singer and actor took to Instagram on Sunday, August 7, to share that it was exactly five years since he was first diagnosed with cancer.

“Exactly 5 years to the day since my diagnosis,” Ruffo wrote.

“Still fighting this son of a b-tch #fuckcancer. Thanks for all the support! ”

Ruffo posted a slew of photos documenting his battle with the disease. Some of the pictures included snaps of him in the hospital and others alongside his long-term girlfriend Tahnee Sims.

Both his fans and other well-known Australian faces showered Ruffo with loving messages of support.

Australian actress Emily Symons wrote: “Sending so much love to you Johnny ♥️♥️.”

Fellow Home and Away star Georgie Parker added: ” love to you mate.”

Fans have called Ruffo the human form of “strength and courage” and have encouraged him to “keep fighting the good fight,” reminding him that he deserves  “to beat this bloody cancer and live a happy life for many years to come” with Sims.

Taking to her own Instagram page, Sims paid tribute to her boyfriend by sharing a photo video compilation of Ruffo’s five-year-long battle.

“Five years on, in awe of you every single day,” she wrote.

Ruffo was first diagnosed with brain cancer back in 2017 when what he believed to be a migraine turned out to be a very serious brain tumour.

Speaking with Who Magazine’s podcast Who Are You back in 2018, Ruffo recalled the terrifying ordeal, revealing that his girlfriend saved his life by rushing him to the hospital after he complained of a painful migraine.

But she woke to devastating news the next morning, as doctors revealed he had slipped into a coma due to a fist-sized tumour in his brain, which may have been growing for up to 10 years.

“Basically [the tumour was] the size of my fist in my frontal lobe, so all that pressure was being put on my brain, which explains the severe headaches and blackouts.”

After successfully removing the tumour in 2017, fans were hit with devasting news three years later in 2020 when Ruffo penned a heartbreaking post announcing his brain cancer had returned.

Since then, Ruffo has regularly updated fans via social media, giving them insights on his second bout with brain cancer.

The actor has since appeared in good spirits as he continued to undergo treatments, thanking his fans for their endless support.

Do you have any messages of encouragement for Johnny?