‘Always in my prayers’: New photo of Johnny Ruffo undergoing chemo prompts a surge of support from fans 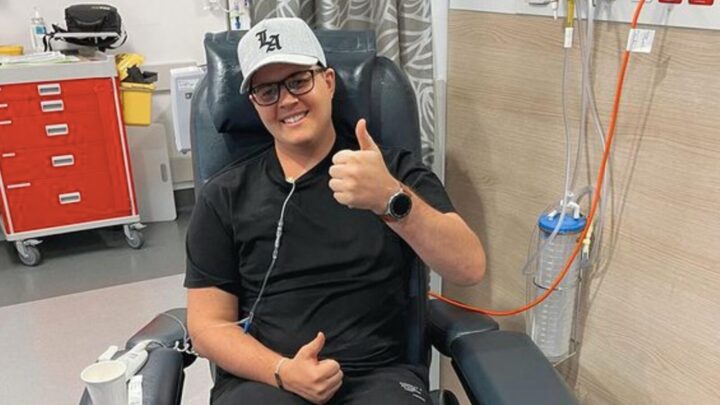 Fans of former Home and Away sweetheart and singer Johnny Ruffo have come together once again to show their loving support for the young star as he undergoes yet another round of chemotherapy.

Not one to let his fans and followers miss out on updates regarding his battle with brain cancer, Ruffo, 34, recently took to Instagram to share a photo of his most recent chemotherapy session while having a snooze.

“Catching up on some zzz’s whilst getting my chemo today,” he captioned the post.

Since sharing the snap, celebrities and fans alike have gathered in Ruffo’s comment section to share kind words and messages of support.

Fellow Home and Away star Lynne McGranger said, “love you my friend, you’re always in my prayers.”

Many of Ruffo’s fans have encouraged the young entertainer to “keep fighting” while others have expressed how his new memoir No Finish Line has made him an inspiration.

“Just started reading your book… my admiration for you has already increased 100000%.”

“Finished reading your book, Johnny. It’s a great read and you’re such inspiration. Sending you so much love and strength to you and your loved ones xx.”

“Reading your book today as I was having my chemo its a great read. I too have brain cancer as well as lung cancer metastatic breast cancer. It all sux but like you I will keep trying ❤❤. Its the little things that count. Seeing you fighting and doing everything you can is an inspiration sending you all the hugs and love xx.”

Earlier in September, Ruffo revealed his cancer diagnosis is terminal, admitting he has feared for his future and what would happen to his girlfriend when he succumbs to the disease.

“It just gets me a little bit emotional about it because I know at some point something will happen, whether it’s, you know, a month from now or 10 years from now or 20 years,” Ruffo had told The Project at the time.

Despite outliving the original three-year life expectancy he was given, Ruffo admitted he is determined to make the most of his life.

“At some point, it will get me but I’m still fighting. Still kicking on…I’m already winning. My goal now is to try and help as many people as I can and also live a happy life,” he said.

Ruffo has since frozen his sperm in the hopes of having children in the future, saying he thought it was a necessary step to take in case he became infertile while undergoing treatment for his brain cancer.