If you liked ‘Bridgerton’ you’ll love these saucy period dramas 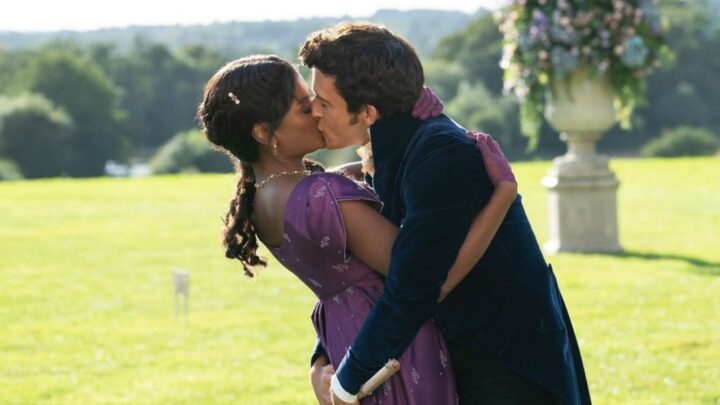 Watch these period dramas while you wait for season 3 of 'Bridgerton'. Source: Instagram @bridgertonnetflix

Historical fiction series have recently been dominating the entertainment landscape, with hit Netflix original Bridgerton leading the way with its stories of matchmaking, sex, salacious rumours, and old-time scandals, what’s not to love?

While season three of Birdgerton may not have an official release date, fans have at least received confirmation on which Bridgerton sibling will find love in the upcoming season. But if you’re still hungry for more Regency-era drama, lustful looks and copious amounts of scandal, these selections of shows will take you back in time to live out your regal fantasies.

When it comes to period dramas, The Crown ticks off all the boxes. For those who haven’t already watched this Netflix original, the series is a fictionalised historical take on the Windsor family aka Queen Elizabeth II and the British Royal Family.

The show tackles political issues and isn’t afraid of dipping its toes into some of history’s most memorable scandals. From Princess Diana’s death to the infamous three-way love triangle between Prince Charles, Princess Diana and Camilla, there’s a reason why this show has racked up over 20 Emmy, seven Golden Globes, and even faced the possibility of a lawsuit from the British Royal Family.

All four seasons of The Crown are available for streaming on Netflix, with the fifth and final season set for release later this year.

Hulu’s raunchy satire The Great is a loose retelling of the younger years of Russian empress Catherine the Great, played by Elle Fanning, and her husband, Peter III, played by Nicholas Hoult.

This show takes a more comically darker route rather than appearing as a pure biopic. As per the show’s official synopsis, The Great is a “fictionalized, fun, and anachronistic story of an idealistic, romantic young girl, who arrives in Russia for an arranged marriage to the mercurial Emperor Peter.”

Fans of Eloise Bridgerton and her modern feminist approach to the society she lives in will equally admire Catherine as she attempts to change the backwards world her empire rules. This modern retelling highlights the many roles the Russian empresses played over her lifetime- as a lover, teacher, ruler, friend, and fighter.

All three seasons of The Great are available for streaming now on Hulu with season 3 already in the works.

On the topic of historical romance dramas, Reign is another series that focuses on a controversial female historical figure in Europe. Loosely based on the life of Mary, Queen of Scots, Reign introduced audiences to the politics, sexual intrigue, and treacherous world of the French court.

The show follows a teenage Mary (Adelaide Kane) who is sent to France to marry Prince Francis to secure Scotland’s strategic alliance with the country. This coming of age series quickly shifts into a fiery political drama filled with steamy sex scenes and historical romances- Reign is guaranteed to be everyone’s guilty pleasure show.

All four seasons of Reign are available for streaming on Stan.

If you like the steaming chemistry between Simon Basset, Duke of Hasting, and Daphne Bridgerton, then Outlander should 100 per cent be on your “must watch” list. While there are plenty of steamy scenes to go around, this series also does an interesting take on time travelling.

Adapted from the internationally best-selling book series, this show follows the story of Clare Randall (Caitriona Balfe) a married World War 2 nurse who mysteriously gets swept back in time to 1743, where she is faced to fend for herself as she is continuously faced with life-threatening events. To ensure she stays alive long enough to get back to her own time period, Clare is forced to marry the chivalrous, romantic Scottish worrier, Jamie Fraser (Sam Heughan). A passionate affair ignites between the two as Clare is faced with trials of the heart as she begins to question whether returning home to her husband is worth the trouble.

Outlander has everything, as the series covers the genres of romance, Sci-Fi, history, and adventure.

All six seasons of Outlander are available for streaming on Netflix.

If you enjoyed Bridgerton but deep in your heart love Downton Abbey then The Gilded Age is right up your alley. Brought to you by the Julian Fellowes, the same creator of Downton, this series is set in 1880’s America and follows a young Marian Brook (Louisa Jacobson) as she makes her move from rural Pennsylvania to New York City to live with her old money aunts Agnes van Rhijn (Christine Baranski) and Ada Brook (Cynthia Nixon).

This series is sure to please any period drama aficionado with its luxurious costumes, witty dialogue, diverse cast, promising romances, and of course a healthy serving of scandal.

While some period dramas are known to be gritty and dark, The Gilded Age offers the audience a classy and sophisticated story.

Season one of The Gilded Age is available for streaming on Hulu, with season two already in production.

If you’re a fan of aging patriarchs, grovelling children, and families with a voracious appetite for power then there are some great Western dramas currently available for streaming right now. Otherwise, if you’re needing a break from saucy, scandalous period dramas there’s also a heap of highly anticipated shows and movies being released this June 2022 to keep you entertained.

What other shows do you recommend we should watch?