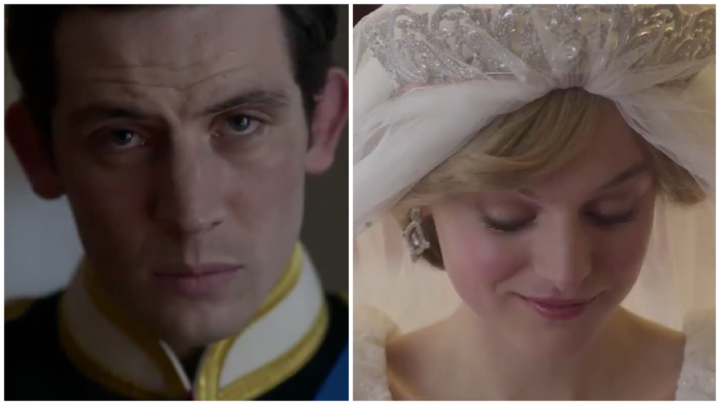 The marriage of Charles and Diana will feature prominently in season four of The Crown. Source: Netflix.

With just weeks to go before the fourth season of hit Netflix drama The Crown drops on the streaming service, the program’s creators have released a thrilling new trailer which puts the marriage of Prince Charles and Diana, Princess of Wales front and centre.

The 90-second trailer begins with shots of Princess Diana greeting Her Majesty the Queen and all looks well between the young couple, with one shot even showing Charles (played by Josh O’Connor) and Lady Diana Spencer (played by Emma Corrin) dancing together. However the tone then switches and in one tense scene Prince Charles can be seen shouting furiously at his wife-to-be, before the clip ends with a glimpse of Diana in her statement wedding gown.

It seems fans can’t wait for the new series to drop, especially due to the highly-anticipated introduction of young actress Emma Corrin as the late Princess of Wales. One excited fan wrote: “Can’t wait to see the legendary Princess Diana.”

Another commented: “There is way too much to take in in 90 seconds. Oh Lordy Lord, I just can’t wait.” While another said: “As always it looks really good! I would imagine there will be many iconic outfits Diana wore in the 80’s. The attention to detail in this series is absolutely flawless!”

The new trailer comes just weeks after Netflix treated viewers to a glimpse of the show’s replica of Princess Diana’s iconic 1980s wedding gown. Earlier this month the streaming platform a series of behind-the-scenes pictures.

One of the photographs showed actress Emma Corrin, who joined the ensemble as Princess Diana this season, wearing an almost-identical replica of the late royal’s iconic bridal gown – complete with 25 foot train. The incredible dress was created by costume designer Amy Roberts, in collaboration with David Emmanuel who, along with former wife Elizabeth Emmanuel, was responsible for the Princess of Wales’ show-stopping dress and train.

Do you watch The 'Crown'?