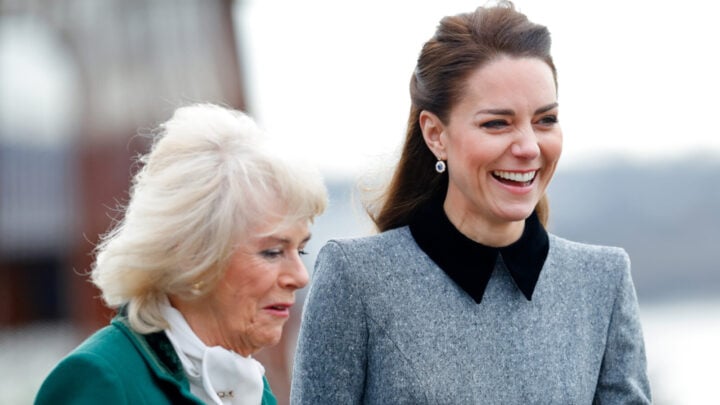 The iconic image was allegedly taken by The Duchess of Cornwall’s country dresser, Shona Williams, and sees an elegantly dressed Camilla smile for the camera as a casually chic Kate takes her picture, bending her knees and zeroing in like a true professional.

According to the Daily Mail. Kate’s stunning snaps were taken at the Duchess of Cornwall’s country retreat, Ray Mill House, in Lacock, Wiltshire.

The unorthodox royal shoot comes as Country Life magazine prepares to publish a special “commemorative collectives’ issue” which will act as a “highlight in a year-long celebration of the magazine’s role in marking the nation’s heritage and championing the countryside and rural life”.

In a separate image released, Camilla looks stunning in a baby blue, floral dress and matching light blue cardigan as she sits by a garden basket of freshly picked flowers.

Editor of the magazine, Paula Lester, expressed her delight at the end result of the photographs, admitting Kate’s photography skills exceeded all expectations.

“In fact, the set of images she took was so good that we struggled to choose only three, from which The Duchess of Cornwall made her final selection,” Lester said.

“She phoned me to discuss our requirements for the cover and subsequently composed a range of beautifully shot images,” Lester said.

As revealed by the Daily Mail, the special magazine edition comes as Camilla is set to celebrate her 75th birthday and will “reflect The Duchess’s love of horses and dogs” and “reveal her champions of the countryside, her most cherished view and favourite recipe”.

Editor and chief of the magazine, Mark Hedges, praised Camilla as a “passionate countrywoman”, revealing the magazine was “delighted that she follows her husband in presiding over this commemorative edition”.

The two royal women have seemingly become particularly close over the past years, often pictured enjoying friendly moments together at royal engagements.

Earlier this year, On Thursday, February 3, the Duchess of Cambridge joined Prince Charles and Camilla in a rare outing in London.

It is understood that Kate had been personally invited to attend the event by her father-in-law, Prince Charles, because of their “shared interest and longstanding support of the arts and creative industries.”

The special edition of Country Life is set to be published on July 13, 2022.