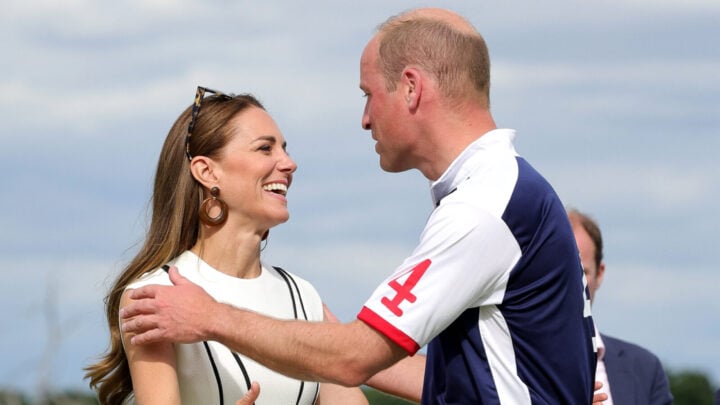 The Duke and Duchess of Cambridge shared a touching moment at the Royal Charity Polo Cup 2022 in Windsor on Wednesday, July 6, after Prince William sadly lost his match.

The couple was videod pulling each other into a loving embrace as they shared an adorable double kiss to commemorate the match, as the Duchess seemed to offer her support for her likely disappointed husband.

According to Nine, The Duchess’s dress actually “comes belted but the royal opted out of cinching it in at the waist for a more relaxed fit for the outing”.

Ever ‘dressed for the occasion’, Kate wore her hair down in loose waves and paired the casual ‘day out’ look with leopard print sunglasses and large matching hoop earrings.

The couple’s two-year-old black Labrador, Orla, even popped down to enjoy the day’s excitement, looking as perfectly groomed as the royal couple themselves.

The Royal Charity Polo Cup 2022 comes as means to increase awareness and generate funds for the Duke and Duchess’s many royal charities, with the couple currently supporting 10 charities in total.

The royal couple has attended a number of more formal engagements recently, so the sunny day out likely comes as a welcomed break from official duties, as was their recent trip to Wimbledon.

Kate, along with her husband, Prince William, arrived at the quarter-finals of the tennis championship on Tuesday morning, July 5, and sat in the Royal Box with the chairman of the All England Club, Ian Hewitt, and her parents, Carole and Michael Middleton.

On a more formal occasion, the couple recently attended the unveiling of their first official portrait which went on display at the University of Cambridge’s Fitzwilliam Museum on Thursday, June 23.

William and Kate were both on hand to reveal the portrait to the public for the first time, which was commissioned by the Cambridgeshire Royal Portrait Fund in 2021 and painted by artist Jamie Coreth, as a gift to Cambridgeshire.

On Wednesday, June 22, the couple were pictured visiting Waterloo Station where they were present for a special unveiling of a national monument in tribute to the aspirations and valour of the Windrush pioneers, who bravely arrived in the UK from Caribbean countries between 1949 and 1971.