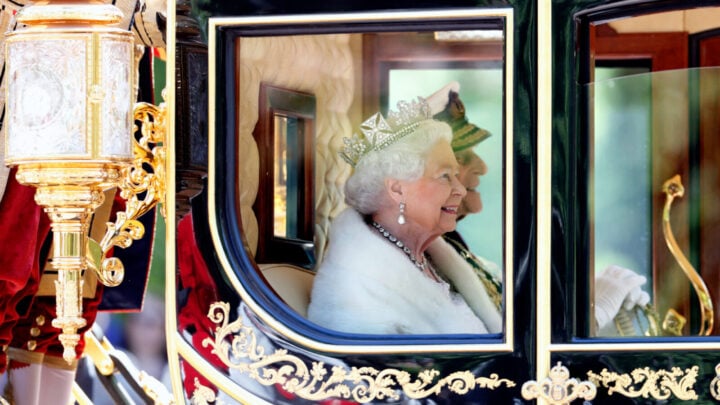 The stunning 'masterpiece' crown is made with 1,333 diamonds and was originally created for Her Majesty to wear to King George IV's coronation in 1821. Source: Getty

It has been revealed that Queen Elizabeth’s II fan-favourite diamond crown will be making an appearance at an upcoming royal exhibition in celebration of the monarch’s Platinum Jubilee celebrations, commemorating 70 years of Her Majesty on the throne.

The ‘Diamond Diadem’ has become a popular choice for her beloved Her Majesty with the monarch pictured donning the extravagant crown at a number of noteworthy royal engagements. The brilliant jewellery item was famously worn by the Queen for her 1952 royal photoshoot with esteemed English photographer Dorothy Wilding. The exclusive photos went on to be displayed on millions of royal-themed postage stamps between 1953 and 1971.

According to the Daily Mail, the “Diamond Diadem, which was often worn by the Queen on her journey to and from the State Opening of Parliament since the first year of her reign, will be part of an exhibition to celebrate her 70 years on the throne”.

The stunning ‘masterpiece’ crown is made with 1,333 diamonds and was originally ordered for King George IV to wear to his coronation in 1920. It is set to be featured “with other historic jewellery in the State Rooms of Buckingham Palace during the Royal Collection’s summer opening from July 22 to October 2 as part of an exhibition exploring the Queen’s accession,” as revealed by the Daily Mail.

Other iconic pieces set to be displayed at the highly-anticipated exhibition include the Queen’s Delhi Durbar necklace and a number of Her Majesty’s incredibly delicate brooches – many that represent the emblems of the Commonwealth countries under her reign. Each brooch will represent an event, country or moment of some significance, such as The Queen’s Australian Wattle Brooch, a memoir gifted to Her Majesty during her first visit to Australia in 1954.

Multiple exciting events have been scheduled for the monarch’s upcoming official Platinum Jubilee celebrations in June, including ‘The Trooping of the Colour’ on June 2, ‘Service of Thanksgiving’ on June 3, ‘Platinum Party at the Palace’ on June 2, ‘Big Jubilee Lunch’ on June 5, and a number of other events and engagements.

Due to the Queen’s ongoing mobility issues which have seen her postpone and cancel a number of engagements over recent months, it is currently unknown which Platinum Jubilee events and engagements the monarch will be in physical attendance at. As revealed by the Daily Mail, “Final decisions on the Queen’s appearances across the weekend are not likely to be announced until the day they are due, Buckingham Palace said”.

Despite the monarch’s ongoing health struggles, the Queen surprised royal watchers this week with her first public appearance since Prince Phillip’s memorial as she appeared in high spirits at the Royal Windsor Horse Show held on the grounds of Windsor Castle on Friday May 13, 2022.