Dame Joan Collins slams Harry and Meghan, questioning why ‘we need to give them more oxygen’ 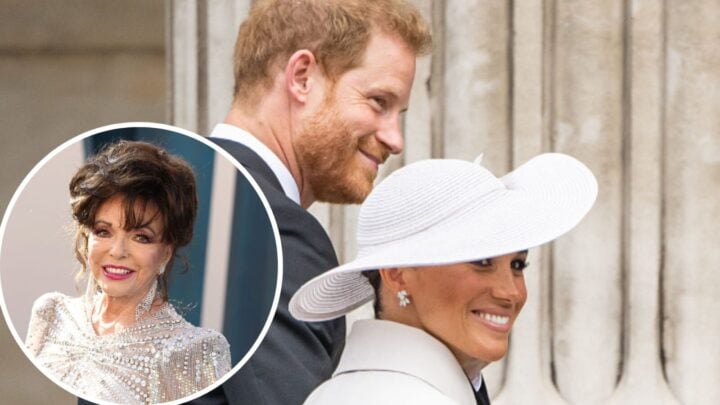 Dame Joan Collins has held little back regarding her feelings towards Meghan Markle and Prince Harry as the royal couple make their return to British soil.

Appearing on Good Morning Britain, the 89-year-old Collins was asked by host Susanna Reid what she thought of another royal duchess.

“Who could that be?” Dame Joan asked. “I have no idea. Do we need to give them any more oxygen?”

Pushing on Reid told Collins that the royal couple is currently in the UK to attend a number of charity events, to which Collins simply said: “Oh really? I haven’t had a chance to read up.”

This isn’t the only time Collins has been pressed about her opinion on Meghan and Harry, during a chat with controversial TV personality Piers Morgan in 2021, the actress was asked what she thought about the ongoing feud between the Sussexes and the Royal Family.

Collins was quick to reply with a diplomatic response, claiming her lips were “sealed on that subject”

“I just don’t want to go on national TV and say what I feel about Meghan and Harry because look what happened to you!” Collins said.

The Sussxes arrived in England on Monday, September 5, ahead of Meghan’s appearance at the One Young World 2022 Summit where she is expected to give a speech on gender equality.

Her scheduled public appearances comes shortly after the release of her tell-all interview with The Cut, where the Duchess of Sussex revealed she has “made an active effort” to make peace with the Royal Family, despite claiming that her existence is “upsetting the dynamic” of The Firm.

When asked whether forgiveness is on the cards between Markle and Royal members, the 41-year-old revealed that she believes “forgiveness is really important”.

In her profile of Meghan, Duchess of Sussex, @AllisonPDavis intimately captures the resilience Meghan has displayed despite the almost unimaginable pressure she has been under, and photographer @CampbellAddy captures her ready for a fresh start https://t.co/UJrc1GfmXm

Since stepping down from royal duties in 2020 and the infamous Oprah Winfrey interview in 2021, the Sussexes have been mostly estranged from the Royal Family.

However, Meghan held little back in the first episode of her new podcast Archetypes, addressing the criticism she faced when she first started dating her now husband, Prince Harry.

While discussing her time growing up in an all-girls Catholic school in Los Angeles, Markle revealed that she was taught to feel empowered, saying the “feminist ideology” is incorporated into every aspect of her life.

“This message to me and my classmates was clear: our futures as young women were limitless. Ambition? That was the whole point!” she said.

“So I don’t remember ever personally feeling the negative connotation behind the word ‘ambitious’ until I started dating my now-husband.

“And apparently ambition is a terrible, terrible thing, for a woman, that is according to some. So, since I’ve felt the negativity behind it, it’s really hard to un-feel it.”

Entertainment columnist Celia Walden from The Telegraph writes: “If the rest of the season is anything like the premiere, what we’re really going to be listening into week after week is Meghan interviewing herself.”

Following the debut of her podcast, the series has been met with mixed reviews from several listeners taking. Many took to social media claiming the Duchess podcast was “amazing” and were  “proud to see Meghan shine and put other women in the spotlight,” while others felt differently about her show.

The Times’s deputy books editor and columnist James Marriott rated the podcast one star, claiming “the podcast is a tastefully soundtracked parade of banalities, absurdities and self-aggrandising Californian platitudes.

“The effect of all the tinkly music and vapid conversation is to make you feel you’ve been locked in the relaxation room of a wellness spa with an unusually self-involved yoga instructor.”