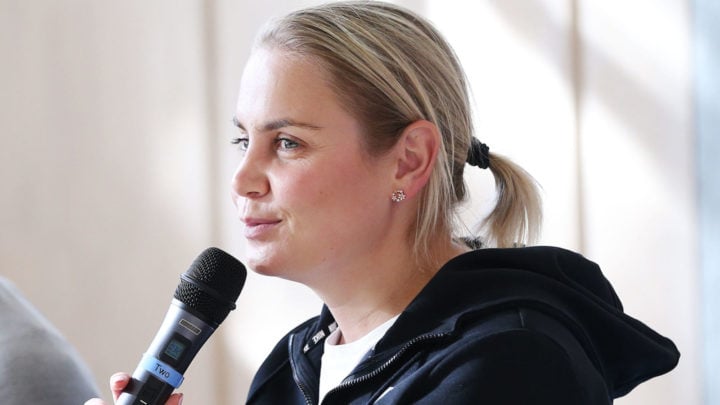 She has made no secret of her weight loss transformation in recent months, regularly sharing progress pictures on social media, and now tennis star Jelena Dokic has unveiled the full extent of her transformation in a never-before-seen photograph.

The 36-year-old, who tipped the scales at 120kg at her heaviest, revealed she has shed an incredible 53kg in just 18 months, having shed the final 31kg over the past year. The Croatian-born tennis star, who became a Jenny Craig ambassador earlier this year, credited the nutrition program with helping her to achieve her impressive overhaul.

Sharing her unbelievable transformation on social media, Jelena shared three images of herself at different stages of her weight loss journey. The first showed her at the beginning, while the third showed her now, more than 50kgs lighter – and the sporting star, who hung up her racquet in 2014, looked barely recognisable.

“It’s been quite a journey for me in the last 18 months,” she wrote alongside the images on Instagram. “I have been very open about my weight struggles and I have decided to go through this whole process very publicly.

“It wasn’t always easy but nothing worth doing ever is and the first step was the hardest. I had my bad days as well where I didn’t believe getting fitter and healthier was possible and that’s normal. I am so happy to say that now 18 months later I am 53 kilos lighter and even more importantly I have lost 31 kilos in the last 12 months. Those last 30 kilos where the toughest to lose and I never would have been able to do that if it wasn’t for @jennycraigausnz.”

Fans couldn’t believe Jelena’s transformation and hundreds of people congratulated the former world number four for her achievements, with many describing her as their “inspriation”. One person wrote: “Well done! You look fantastic, hope you feel that way and that you’re proud of your achievement! Very inspirational.”

Another said: “You look amazing!! Well done. I signed up with the program today looking forward to my weight loss journey, you are my inspiration!”

While a third commented: “Wow, Jelena! Look, anyone who has read your book knows the enormous capacity you have always had to work hard at something. But I’m sure most people know just how difficult this weight loss journey is, no matter what inner strength a person might have. HUGE congratulations to you!!!”

Jelena added: “I have gone from not having any confidence at all and hiding in the house and not wanting to go outside, to really enjoying life. I am looking forward to what’s ahead and I look forward to new challenges both in life and my health and fitness as I feel like I can accomplish anything now.”

Earlier this year Jelena showed off her transformation so far as she shared a bikini snap with her social media followers. She captioned the post: “Good morning!! Another beautiful summer morning in Croatia and I am in full vacation mode. Morning swims are the best.”

The tennis coach and commentator prveiously told the Herald Sun that many factors contributed to her weight gain including the physical and mental abuse from her father Damir, along with metal health battles, a thyroid condition and glandular fever.

“I was thrown into retirement not knowing what direction I wanted to go in,” she said. “When you’re a professional athlete, you’re in this bubble that’s not reality – everything is done for you … training, food, travel, management, so going back into real life was very different.”

Can you relate to Jelena's journey? Have you been through a weight loss transformation?