Expert warns 20% of vaccinated Aussies still get the flu 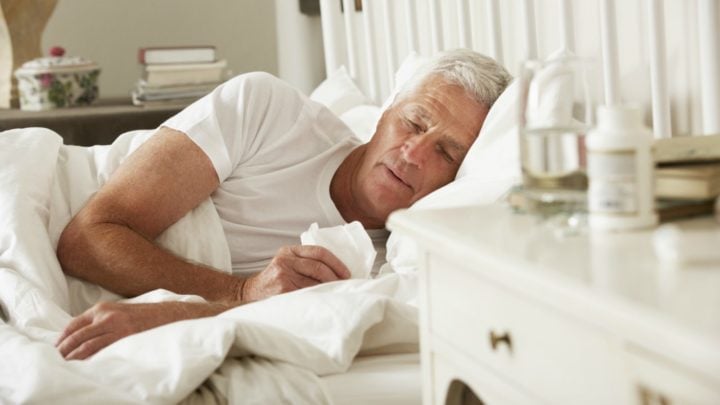 While the flu vaccine is the best way to protect against influenza, a leading expert warns that up to 20 per cent of people may still get the flu and need to put other measures in place to keep themselves safe. Source: Shutterstock

With flu season in full swing across Australia, 100,494 laboratory confirmed notifications of influenza have already been reported by the Immunisation Coalition.

While a number of deaths have been reported and new A and B strains putting over-60s at risk, an expert has warned that despite being vaccinated, some people will still go on to catch the flu.

Speaking to Neil Mitchell on 3AW radio on Friday, Associate Professor Lou Irving, Director of Respiratory and Sleep Medication at the Royal Melbourne Hospital, explained that up to 20 per cent of people who are vaccinated get the flu, but this figure varies from year to year.

“But it does happen,” he warned. “The vaccine is not 100 per cent effective and we do need to have other measures up our sleeve, particularly in a busy year like this year.”

Despite up to a fifth of vaccinated people still at risk of getting the flu, Irving said Australians should still remain confident that they’re protected because the majority of people will be covered.

“It’s still the best way of preventing flu, but it’s not 100 per cent,” he explained. “We need to be alert and forearmed that if we become unwell having been vaccinated with a flu-like illness, there are other measures that may need to be taken.”

Read more: The flu and you: What to know about the 2019 influenza season

The key in beating the flu is acting quickly. There are antiviral treatments that can be effectively used in early flu within the first two days of symptoms. Preventing flu symptoms as early as possible also isolates it and stops it from spreading to others in the community.

Acting quickly can also stop it from impacting other existing health issues including heart failure, diabetes and lung issues.

Symptoms can vary and range from high fever, a dry cough and body aches to feeling unwell, experiencing a loss of appetite a runny nose or a sore throat. Children and over-65s are naturally more at risk of contracting influenza because their immune systems are weakened.

While the flu leaves many people bed-ridden and even hospitalised, extreme cases can lead to other health complications such as pneumonia or even death.

Irving added that those who have been vaccinated are generally likely to experience less severe symptoms if they do get the flu, but said people shouldn’t become complacent.

“If they become sick, they need to see their doctor,” he said. ‘If you’re just a little bit unwell, stay away from work or school so you don’t spread it to anyone else, but if you’re very unwell and not getting any better after two to three days, you need to get medical help.”

The virus can spread through sneezing and coughing, while it can also settle on surfaces that people regularly touch.

“If people touch the surface and then touch their face, they can transmit the virus by touching infected door handles, desktops,” he said. “So hand washing is very important.”

New South Wales has seen the biggest number of cases so far this year, with 29,028 confirmed cases. Victoria has reported 19,942, while Queensland has seen 18,205 official cases.

It’s always best to talk to a GP or health professional about the best vaccine for you, as high-dose vaccines may be available for people with certain health conditions and for over-65s.

Have you had the flu vaccine? How effective do you think it is in preventing the flu?