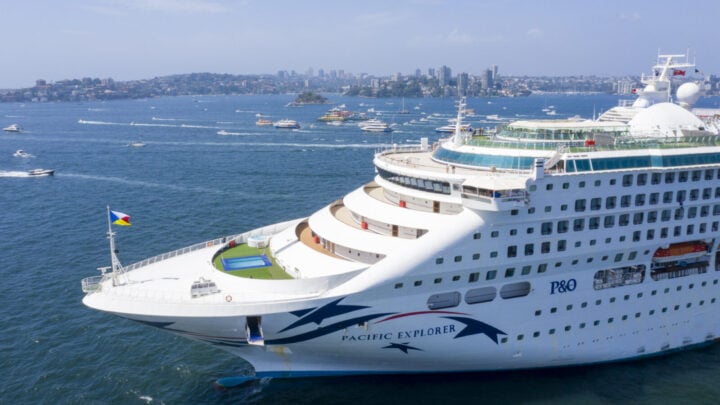 Multitudes of travellers and cruise operators are booking their spots, jump-starting the comeback of the $150 million tourism giant. Source: Getty

Queensland is all set for the return of cruising with the Brisbane International Cruise Terminal welcoming the state’s first cruise ship in two years next week. Arriving Thursday, June 2, P&O’s Pacific Explorer will pioneer the lead of 50 voyages into the $177 million port. Multitudes of travellers and cruise operators are booking their spots, jump-starting the comeback of the 150 million dollar industry.

The Brisbane International Cruise Terminal sitting at the mouth of the Brisbane River was completed just months after the Covid-19 pandemic began and has been used as a vaccination centre and US Navy base while awaiting its first luxury liner to christen its docks.

The Pacific Explorer kicks off the return of cruising to Queensland.  It arrives from Sydney where it has been harboured in Circular Quay since it returned to Australian waters on April 18.

“It was always going to be an emotional homecoming for Pacific Explorer and her crew and this morning was a fitting celebration for her return to Sydney,” Fitzgerald said.

“Pacific Explorer’s arrival has replaced uncertainty with optimism and marks the rebound of cruising, on the way to re-establishing Australia as the world’s most successful cruise market, previously contributing more than $5 billion annually to the national, state and regional economies, and supporting 18,000 jobs.”

Following the Pacific Explorer, the Coral Princess docks in Brisbane on June 7, beginning a number of voyage itineraries for the state. From November, the Royal Caribbean’s Quantum of the Sea will be based out of the Brisbane hub. Queensland ports including Airlie Beach, Cairns and Port Douglas will join the itinerary for the floating palaces including the Queen Elizabeth, Queen Victoria and Queen Mary 2.

Travel deals: See all the upcoming Cruise Departures from Port of Brisbane featured on Travel at 60

“Australians are very excited to see cruise ships back in our ports again, ready to set sail. Queensland is leading the way, opening the beautiful new Brisbane Cruise Terminal for the first time next week to passengers. This will be a very well-used terminal in the months to come,” Harch said.

“Travel at 60 is seeing strong demand from people wanting to book cruises on ships in 2022, with plenty of Queensland clients ready to test out the new Brisbane departures.
“Many cruises depart or come through Brisbane on their way to North Queensland, Papua New Guinea, Sydney, Melbourne and New Zealand.”

Travellers excited to jump back on board will be able to sail across international waters into New Zealand, with Prime Minister Jacinda Ardern declaring the country “fully open for business” from July 31, 2022.

“New Zealand’s international border will reopen to all tourists and visa holders two months earlier than planned on 31 July, 2022.”

New Zealand Tourism Minister Stuart Nash said the reopening “means it’s full steam ahead for the [cruise] industry who can plan with certainty for the rest of the year and beyond”.

The Majestic Princess is anticipated to be the first cruise ship to enter New Zealand waters, set to arrive in Auckland on October 12, followed by the Queen Elizabeth popular with over-60s for its VIP treatment, daily high teas and grand gala events straight out of the 1930s.

“The first sailing of the Queen Elizabeth will leave Sydney on 13 December 2022 on an itinerary forming part of our sought-after Christmas Voyage. Imagine yourself indulging in fresh, local seafood, exploring one of the largest gingerbread villages at sea and standing under an oversized Christmas tree in Queen Elizabeth’s spectacular Grand Lobby; all whilst sailing through the beautiful Fiordland National Park on Christmas Day.  [You can book this departure and others via Travel at 60 here]

Travel at 60 is taking bookings for all major cruise lines. Sign up for the Travel at 60 emailer here to get access to new releases and amazing deals as they arrive.

Have you booked a cruise for this year or next?