‘Waiting for their mistress’: The Queen’s beloved animals join mourners in London 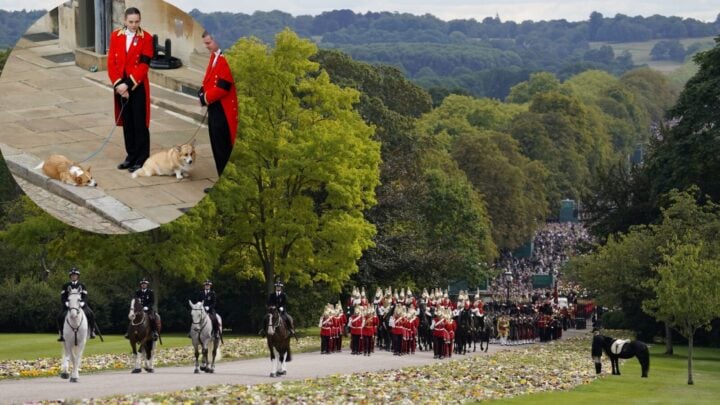 It’s no secret the Queen was an animal lover, owning over 30 corgis over the course of her life and a stable of horses of which she regularly went riding.

It also seemed that the Queen’s love was reciprocated, as images of the Queen’s corgis and her favoured fell pony emerged, looking forlorn, as Her Majesty made her final journey home.

Two corgis, Muick and Sandy, watched the coffin pass by, looking sorrowful, as they sat along the steps of the castle while the black horse, Emma who wore the Queen’s scarf on her saddle, pawed at the ground as the procession passed in what many believe was a curtsy to the Queen.

The Queen’s Corgis saying goodbye, today during the funeral, was sad. ???? pic.twitter.com/LOiYeDgypX

Mourners have said they were not “emotionally prepared” to see Her Majesty’s precious animals without their cherished owner.

Kinda tipped me over the edge that. Forget the crown, she was a mum, a gran, an animal lover …. So sad.

Well that got me.
HM The Late Queen’s favourite horse, a fell pony named #Emma out on parade to oversee her final return to #WindsorCastle. #emma #queensfuneral #QueenElizabethII #QueenElizabeth pic.twitter.com/BpktfVw0bP

I’m sure Emma curtsied. That broke me

Did the Queen’s pony Emma just courtesy as the Queen passed by!?#queensfuneral pic.twitter.com/9VwL6j4qyv

Following the announcement of the Queen’s passing on September 8, dog lovers the world over were left wondering what would happen to Her Majesty’s beloved pooches.

According to People, the Monarch’s two dogs have been adopted by Prince Andrew and his ex-wife Sarah “Fergie” Ferguson.

“The corgis will return to live at Royal Lodge with the Duke and Duchess. It was the Duchess who found the puppies, which were gifted to Her Majesty by the Duke,” a source told People.

The Queen’s funeral procession began at Balmoral Castle in Scotland and travelled to Edinburgh, then Buckingham Palace in London before making its way to Westminster Hall for Her Majesty’s Lying-in-State four-day ceremony, then to Westminster Abbey for her State Funeral before finishing at her home in Windsor Castle.

Buckingham Palace announced that the Queen’s family will hold a private ceremony to farewell the late Monarch on the evening of September 19, following her State Funeral.

“This evening a Private Burial will take place in The King George VI Memorial Chapel at Windsor,” the statement on social media read.

“The Queen will be Laid to Rest with her late husband The Duke of Edinburgh, alongside her father King George VI, mother Queen Elizabeth The Queen Mother and sister Princess Margaret.”