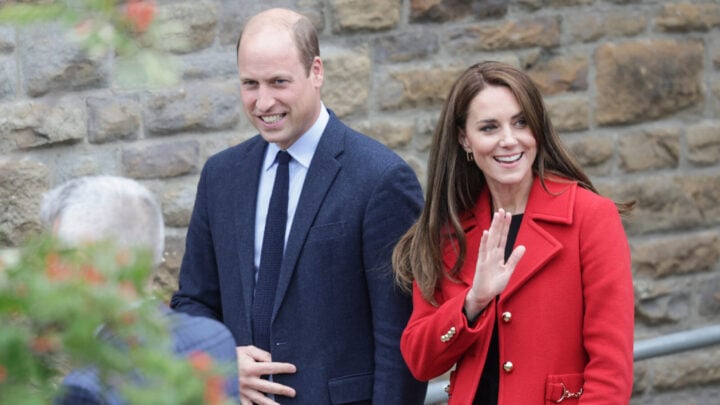 Prince William and Kate Middleton visit Wales for the first time since becoming Prince and Princess of Wales. Source: Getty

The Prince and Princess of Wales have visited the nation, where they lived for three years as newlyweds, for the first time since taking on their new titles.

Kate Middleton and Prince William visited the country on Tuesday, September 27, to carry out the first official Royal duties since the Queen’s mourning period ended.

The period of Royal Mourning following the death of Her Majesty Queen Elizabeth has now ended.

This account will continue to reflect the work of The King, The Queen Consort and other members of The Royal Family, as well as remembering the life and work of Queen Elizabeth. pic.twitter.com/BKx9wUtRF8

To touch base with a number of causes close to them, the pair kicked-off their visit in Anglesey, where the Prince worked as a search and rescue helicopter pilot with the Royal Air Force from 2011 to 2013.

— The Prince and Princess of Wales (@KensingtonRoyal) September 27, 2022

Volunteers and Crew of the Royal National Lifeboat Institution (RNLI) Holyhead Lifeboat Station, as well as people who have benefited from the station’s services, were the first to receive a visit from the Royal couple.

The lifeboat station has received 70 awards for its heroic efforts at sea.

The visit was reminiscent of Kate’s first ever Royal Duty in 2011, two months before her marriage to William, where she helped the island launch a new lifeboat.

Later in the day, William and Kate attended the town of Swansea where they met with a community hub and food bank that feeds over 200 people a week.

The pair also met with the team at Swansea Baby Basics, a cause close to the Princess’s heart which she has had active involvement with, helping mothers in need obtain essential baby items.

Prynhawn Da Swansea! Thank you to everyone we saw at @StThomasSwansea this afternoon.

It was fantastic to join the team supporting their community with everything from facilities for the homeless to a foodbank and brilliant baby bank, Baby Basics. What a special community hub! pic.twitter.com/GMjxNYpk5d

— The Prince and Princess of Wales (@KensingtonRoyal) September 27, 2022

The last time William and Kate were in Wales was during the late Monarch’s Platinum Jubilee celebrations, taking their children Prince George and Princess Charlotte to the city of Cardiff.

The Prince and Princess of Wales were appointed to their new titles by King Charles III the day after the Queen passed away.

Accompanied by his wife Camilla, the Queen Consort, and his eldest son Prince William, King Charles was officially proclaimed Britain’s new Monarch in a history-making ceremony on Saturday, September 10 that was televised for the first time.

Joined by approximately 200 senior politicians and officials at St James’ Palace for the Accession Council, he was officially proclaimed King by Clerk of the Privy Council of the United Kingdom, Richard Tilbrook.

King Charles delivered a declaration to the ceremony where he pledged “to follow the inspiring example” set by his mother, Queen Elizabeth II, in “upholding constitutional government” and vowed, “to seek the peace, harmony and prosperity of the peoples of these islands and of the Commonwealth realms and territories throughout the world”.

“It is my most sorrowful duty to announce to you the death of my beloved mother, the Queen,” he began.

“I know how deeply you and the entire nation, and I think I may say the whole world, sympathise with me into the irreparable loss we have all suffered.

“It is the greatest consolation to me to know of the sympathy expressed by so many to my sister and brothers and that such overwhelming affection and support should be extended to our whole family in our loss.

“To all of us as a family, as to this kingdom, and the wider family of nations of which it is a part, my mother gave an example of lifelong love and of selfless service.

“My mother’s reign was unequalled in its duration, its dedication and its devotion. Even as we grieve, we give thanks for this most faithful life.

“I am deeply aware of this great inheritance and of the duties and heavy responsibilities of sovereignty which have now passed to me.

“In taking up these responsibilities, I shall strive to follow the inspiring example I have been set in upholding constitutional government and to seek the peace, harmony and prosperity of the peoples of these islands and of the Commonwealth realms and territories throughout the world.

“In this purpose, I know that I shall be upheld by the affection and loyalty of the peoples whose sovereign I have been called upon to be and that in the discharge of these duties, I will be guided by the counsel of their elected parliaments.

“In all this, I am profoundly encouraged by the constant support of my beloved wife.

“I take this opportunity to confirm my willingness and intention to continue the tradition of surrendering the hereditary revenues including the crown estate to my government for the benefit of all in return for the sovereign grant which supports the official duties as head of state and head of nations.

“And in carrying out the heavy task that has been laid upon me, and to which I now dedicate what remains to me of my life, I pray for the guidance and help of Almighty God.”

The King then took an oath “relating to the security of the Church of Scotland”.

“I, Charles III, by the grace of God of the United Kingdom of Great Britain and Northern Ireland and of my other realms and territories, King, Defender of the Faith, do faithfully promise and swear that I should inviolably maintain and preserve the settlement of the true Protestant religion as established by the laws made in Scotland in prosecution of the Claim of Right and particularly by an act intituled an act for securing the Protestant religion and Presbyterian church government and by the acts passed in the Parliament of both kingdoms for union of the two kingdoms, together with the government, worship, discipline, rights and privileges, of the Church of Scotland,” he said.