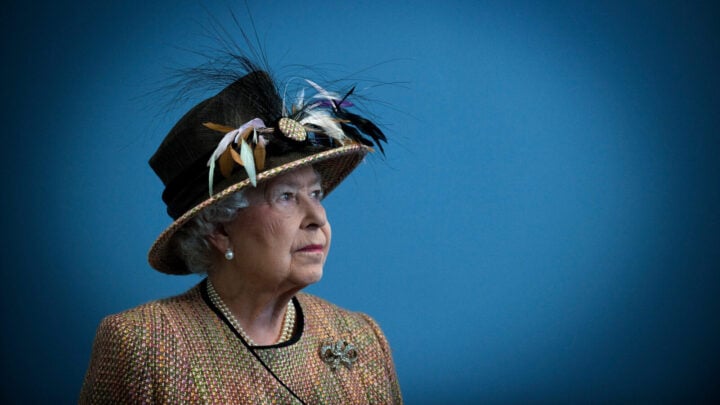 The Queen has entered an official mourning period following the death of her beloved Duke of Edinburgh. Source: Getty

The Queen says Prince Philip’s death has left “a huge void” in her life, but that his peaceful passing was a “miracle”.

The monarch’s sombre words were revealed by her son Prince Andrew as he left a Windsor church service on Sunday with other members of the royal family. Speaking to the press outside the church, Andrew said his mother was carrying on stoically, but was deeply feeling the pain of Philip’s death.

“The Queen as you would expect is an incredibly stoic person,” he said, The Telegraph reports. “She described his passing as a miracle and she’s contemplating, I think is the way that I would put it. She described it as having left a huge void in her life but we, the family, the ones that are close, are rallying around to make sure that we’re there to support her.”

Andrew, who stepped down as a working royal last year over controversy surrounding his friendship with convicted sex offender Jeffrey Epstein, went on to say that his father was a remarkable, calm man who “would always listen”.

“It’s a great loss,” he said. “I think another way I would put it is that we’ve lost almost the grandfather of the nation. And I feel very sorry and supportive of my mother, who was feeling it, probably more than everybody else.”

Meanwhile, Sophie, the Countess of Wessex, who is married to the Queen and Philip’s youngest son Prince Edward, told congregation member that the duke’s death “was right for him”.

“It was so gentle,” she said. “It was just like somebody took him by the hand and off he went. Very, very peaceful, and that’s all you want for somebody, isn’t it?”

Princess Anne, who was very close to her father and was long-rumoured to be his favourite, was not at Sunday’s service but did release a new statement paying tribute to her father, saying he would be leaving a “legacy which can inspire us all”.

“My father has been my teacher, my supporter and my critic, but it is his example of a life well lived and service freely given that I most wanted to emulate,” she said. “His ability to treat every person as an individual in their own right with their own skills comes through all the organisations with which he was involved.

“I would like to emphasise how much the family appreciate the messages and memories of so many people whose lives he also touched. We will miss him – but he leaves a legacy which can inspire us all.”

It comes a day after Prince Charles spoke for the first time since his father’s death, remembering his “dear papa” as “a very special person”. The Prince of Wales addressed the media outside his home, Highgrove House, on Saturday.

“My father, the last 70 years has given the most remarkable devoted service to the Queen, to my family and to the country and also to the whole of the Commonwealth,” he said in a video, which has since shared to the royal family’s official Instagram account. “My family and I miss my father enormously.

“My dear papa was a very special person, who I think above all else would have been amazed by the reaction and what touching things have been said about him.”

The Queen has entered an eight-day period of mourning following her husband’s death, meaning she won’t be taking on any royal engagements during this time. After the eight days, the country is expected to go into an official 10-day long mourning period, while the royal family and household will reportedly do so for 30 days. Prince Philip’s royal ceremonial funeral will take place on Saturday, April 17 at 3pm in the UK at St George’s Chapel, Windsor.

Do you have a message for Queen? Have you lost a life partner?